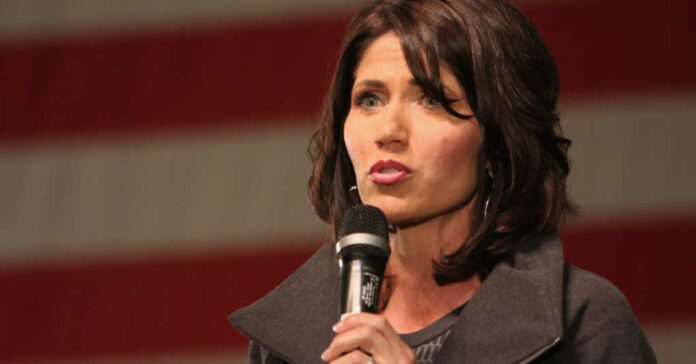 With the announcement by former President Donald Trump that he will be running for the Oval Office again in 2024, it seems the whole of the nation is suddenly weighing its options for that year.

For Republicans, that means considering whether Trump, once and still somewhat beloved, is really what America needs right now. In 2016 and again in 2020, most on that side would have likely said yes. After all, his policies and reforms not only got us through an unprecedented pandemic but also through the economic consequences of that with flying colors.

Given the opportunity to continue moving in that direction, most of us believed that he would truly ‘Make America Great Again,” as has been his slogan from the time he entered the political arena back in 2015.

However, in the year 2022, things are a bit more uncertain, it would seem.

Well, as you can imagine, that depends on who you talk to.

For those like Kristi Noem, GOP Governor of South Dakota and a Trump endorsee, the reason could be that she has her own eye on the White House.

While she’s hasn’t yet made such an announcement, no small number of political pundits have suggested that Noem could seek the GOP nomination for herself.

Or at least that’s what several are reading into since Trump made his announcement, and Noem hasn’t yet endorsed him in that quest. Even more, telling is the fact that she hasn’t exactly been mum on the situation either.

When asked to comment on Trump’s newly announced run by The New York Times, Noem said that she wasn’t yet sure that Trump gave the Republicans the “best chance” of winning in 2024. And until then, she’s keeping her options open.

And she isn’t the only one who has offered at least a little hesitancy in throwing their support behind Trump.

Take Trump’s former secretary of state, Mike Pompeo, for instance. He believes we need “more seriousness, less noise,” and someone who looks to the future, not the past, as insinuates Trump does. Of course, for Pompeo, such a person is himself, as he has made several hints at a presidential run.

Now, that doesn’t mean Trump has necessarily lost a lot of support – at least not according to a number of recent pollings. No less than three polls released by RealClearPolitics, in fact, note that Trump still leads 2024 possibilities by a whopping 25 points. However, it is also stated that of those polls, all three were conducted by organizations that have little love for the GOP at all.

So what that actually means for Trump is questionable.

However, it would seem that a growing number of those on the political right are now beginning to question exactly what Noem is, whether or not Trump is our best option, not only for winning in a general election against the Democrats but also for what this country needs.

While most can agree that his policies were good and still are, not all are convinced that such a controversial person should be the one putting them in place. Instead, many are looking to someone like Florida’s Governor Ron DeSantis, who has been an avid Trump supporter and a man who agrees with nearly all Trump policies but has a bit more eloquence and tact than Trump – not to mention he’s a great deal younger.

I’ve even heard it mentioned that a DeSantis-Noem GOP ticket would be a good one. And I might even agree.

Again, neither has announced a run for themselves as of yet. But as the questionability of another Trump presidency continues, the chances of such only seem to grow by the day. At this point, it’s far too early to tell.

The only thing truly clear is that anyone would currently be better than those sitting in the White House – no matter how controversial he or she might be.