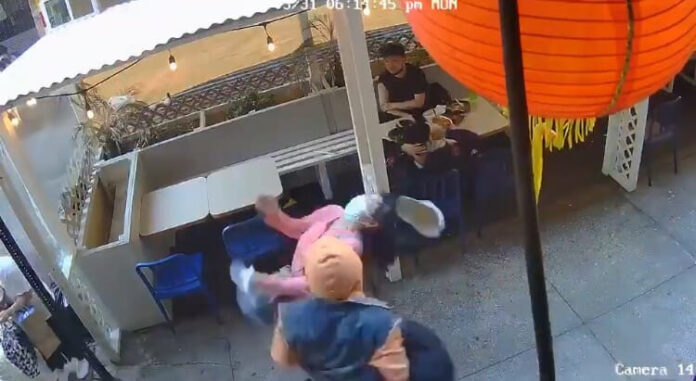 New York Assemblywoman Yuh-Line Niou has received some chilling video that needs to be seen and shared by the mainstream media. Yet again, Asian-Americans are going to be attacked by non-white people and yet again, the mainstream media looks the other way. If this particular attack is any indication, they love doing that and they are not going to stop anytime soon.

A black man was caught on camera behaving in the most heinous matter possible. He came across an Asian-American woman in public and sucker punched her to the ground. This incident took place while she was walking in Chinatown in Lower Manhattan. The man ran up, hit her in the face as hard as he could and watched her fall to the ground.

She fell over backward and was knocked out cold. Yuh-Line Niou says that the attacker has been arrested, which can provide at least a small level of comfort to those who are wondering if the streets of New York City can be kept safe right now. The police are losing their funding and this is what happens when they are no longer able to do their jobs in the manner that they are used to.

What they are not going to tell you about Democrat Assemblywoman Yuh-Line Niou is that she was one of the many liberals who said that cash bail no longer needed to be instituted. That’s great! Now the attackers of these innocent citizens can continue to strike because they know that they are never going to have to face any real consequences for their crimes.

This was just sent to me from my constituent. This just happened in my district in Chinatown. He has been arrested and our precinct is investigating. pic.twitter.com/sxNfCbrlza

“Oh, you beat up an innocent old woman? No worries, sir. Sit tight and wait for your ride to come pick you up,” that’s essentially what they are saying. They have the nerve to wonder why these attacks are becoming so much more commonplace. The removal of law and order from our society has nothing to do with it, as you would expect.

Trump hasn’t been in office all year but they are still finding ways to blame him for events like these. Any time that the mainstream media even thinks to discuss these incidents, they put the mean old orange man in the middle of it. There’s no attack that they cannot spin to make Trump’s fault.

You see, he is the one that told everyone to attack Asian citizens who reside in this country. That’s the mainstream media’s version of events and they are going to be sticking to it. You can’t pry this narrative away from them because it is all they have. Otherwise, they might have to take some level of responsibility for their own reporting.

“This was just sent to me from my constituent. This just happened in my district in Chinatown. He has been arrested and our precinct is investigating,” Niou tweeted. She left out the part where they won’t be able to truly investigate because they are losing funding left and right. The lack of cash bail is another aspect that she won’t want to mention.

The liberals are losing their minds and they do not realize what they have done. There is a decent chance that they are not going to come to their senses until it is far too late. “She is conscious and cognizant and alert. Things are being investigated and the hate crimes task force has been called in,” Niou continued.

She is conscious and cognizant and alert. Things are being investigated and the hate crimes task force has been called in. https://t.co/opJZ3OZwW1

It’s not enough to merely tweet about these heinous crimes. Something actually needs to be done about them. Until the police are granted the ability to do their jobs to the best of their ability, these stories are only going to become more and more common. Hopefully, this victim is able to fully recover from the attack. In the meantime, we will simply have to watch all the liberals do their usual preening and posturing about how all of this matters to them.