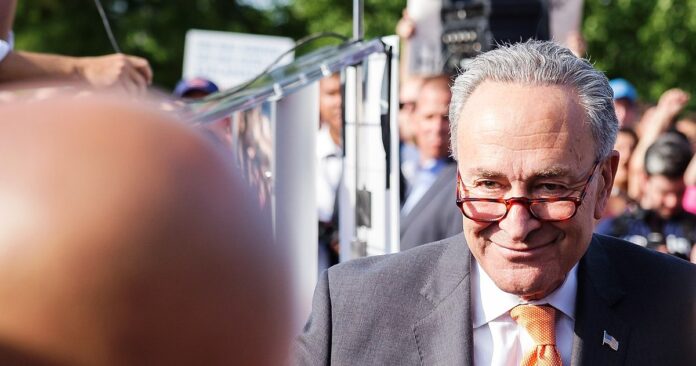 Chuck Schumer has been waiting to get his hands on the Senate as the Majority Leader. Now, he may be able to get his own podium so he doesn’t have to share with Nancy Pelosi. His dreams are coming true, and all he sees are dollar signs.

The New York Democrat can’t wait to start spending the money that the fiscally responsible GOP has been keeping him from.

He’s already thrown out some expensive ways in which to “help” Americans.

How about canceling $50,000 of student loan for every American? While everyone would love the financial help on loans, what about those who worked hard to pay it all off? What about those who just graduated and took those loans out in good faith that they would pay them back?

Chuck Schumer isn’t looking at ways in which to help the economy. He just wants Americans to be happy with him.

He’s also in full support of a third stimulus check. His thought is to send out $2,000 to every American under a certain threshold this time. Whether the people are employed right now or not, he wants to give out checks because he thinks that will make everything better.

He’s willing to bribe Americans into liking the idea that the Democrats are in control of everything. Why would it matter to him? It’s not his money that he’s using.

There’s an ulterior motive with Schumer. He’s up for re-election in 2022. He’s already identified that he’s planning to run. However, he’s going to have some very young, very liberal competition going for his seat. Although Alexandria Ocasio-Cortez hasn’t confirmed that she plans on running against him, the comments have been made.

The $2,000 stimulus checks aren’t just Schumer’s doing, though. Trump criticized the $600 checks for being “ridiculously low.” In an effort to get the checks out to Americans right away, the stimulus bill with the $600 payout was approved.

Joe Biden was quick to say that the checks would “never” get there if the Republicans won the Senate race in Georgia. That’s to say that Perdue and Loeffler were offering lip service in order to get more of the votes.

Biden was also quick to promote Ossoff and Warnock as the ones needed for people to see the $2,000 stimulus check. It’s likely that many people in Georgia voted purely on that – they want the money and they’ll put whomever they need in office to get it.

The only thing that Biden really did was confirm that he and Schumer are of a similar mindset. They’re both looking to spend money that the country doesn’t have. They’re fiscally irresponsible liberals that will have the country bankrupted in no time at all.

Mitch McConnell acted as the voice of reason as the Senate Majority Leader. He blocked the vote to increase the check to $2,000. He called it “socialism for rich people.” He went on to share data that many of the upper-middle-class has managed to hold onto their jobs and remain financially comfortable. Therefore, why provide checks to people who don’t need them?

Now that the voice of reason is the minority leader of the House instead of the majority leader, there’s literally nothing standing in the way of Chuck Schumer and the rest of the Dems from passing bills left and right.

Schumer isn’t who we wanted to be running the Senate. He actually went to the same high school as Bernie Sanders, growing up in Brooklyn. He graduated from both Harvard and Harvard Law School. Then, he was elected to the New York State Assembly at the age of 23. He was a Congressman by 29 and a Senator by 47.

Although Schumer may have a law degree, he’s never held a job other than public office. He has no ability to identify what the American people actually need. He’s the epitome of a politician. And now he holds the purse strings to America’s economy.