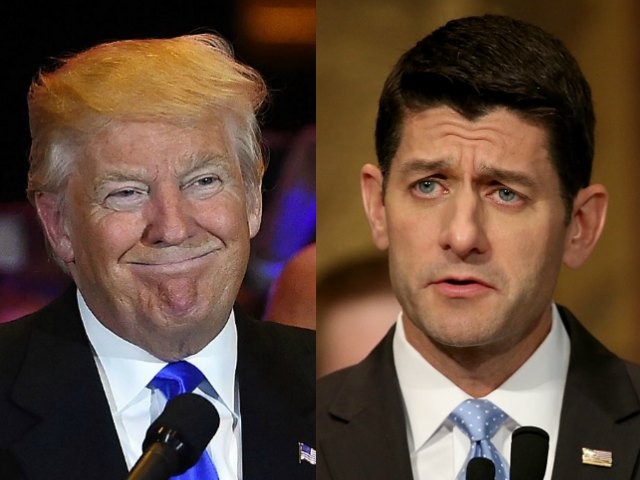 “We want to win,” the establishment champion told ABC News’ This Week on November 20. Trump “is going to continue to lose altitude” in primary polls because “he’s unelectable because [of] that suburban voter.”

The second reason offered by Ryan is his own alternative 2024 White House platform. That platform breaks from Trump’s mostly-populist policies and offers voters a series of healthcare cuts, more wage-cutting migrants, new carbon taxes, and lower taxes for corporate investors.

Ryan’s not-Trump agenda is included in a new book of policy proposals from 19 authors organized by the investor-funded, investor-directed American Enterprise Institute.

The 16-chapter book is titled, American Renewal: A Conservative Plan to Strengthen the Social Contract and Save the Country’s Finances.”

“The purpose of this is to offer a conservative plan to help this country get over its enormous challenges in the 21st century,” Ryan told ABC News. He continued:

We have an unsustainable debt. And we’re on an unsustainable debt trajectory. But we’re going to have to make these [government] programs work better. We’re going to have to reform these programs so that you and I and the X generation on down actually have something. That’s the kind of conversation we have to elevate our debate to, I think, in our federal national politics.

His chapter in the book more-or-less ignores many of the civic issues threatening the Americans who backed Trump in 2016 and back him now in 2022 — free trade, displacement by migrants, drug epidemics, declining wages, unaffordable housing, anti-American ideology in schools, and transgender propaganda of teenagers.

But the book does have plans to provide the GOP’s donors with more migrants, more government spending, and lower taxes.

Breitbart News asked for an interview with Ryan. “Speaker Ryan is unavailable for this request,” AEI replied.

The book does not clearly offer to trade some of the donors’ goals to earn the decisive votes of ordinary Americans.

But it does offer a grand bargain between the establishment Democrats and establishment Republicans — new carbon tax-and-spend programs funded by Americans in exchange for investors getting lower taxes and a share of the carbon taxes.

“The bargain we … are offering our friends on the left, who are rightly focused on removing carbon from the atmosphere, is a better carbon policy in exchange for a pro-growth tax code,” Ryan wrote.

By far the largest fiscal challenges lie in the Medicare program. [In one chapter] James C. Capretta proposes a comprehensive set of reforms that offer the best chance of delivering on Medicare’s core mission while bringing program cost growth under control. The key policy ingredient is bringing more choice and competition to Medicare so that beneficiaries can gain from the improvements in costs and quality of services that come with real competition …

… In his proposal to save Social Security from its pending insolvency, Andrew G. Biggs[‘s chapter] proposes reforms “modeled on systems in countries such as Australia, New Zealand, and the United Kingdom, [that] could pave the way for a more affordable Social Security program without sacrificing Americans’ retirement income security.”

Ryan sketches out a high-tech revamp of poverty programs. The revamp would combine intense, Chinese-style surveillance of individuals’ spending with Ryan’s own style of green-eyeshade pressure on people to take any low-wage, far-distant jobs they can find:

A person would open their digital wallet, and the issuing agency or authority would add the appropriate conditions at that retail level for the benefit to commence. Imagine the endless possibilities for local, state, federal, philanthropic, and fintech entities to pilot and test these digital benefits to rid the system of the incredible amounts of waste, fraud, and abuse that have consistently plagued our national web of poverty programs

Unsurprisingly, Ryan ignores immigration, even though it is also a huge driver of the welfare spending that Ryan wants to cut. Immigration grows government spending because it imports millions of poor, government-dependent people, pushes working Americans out of jobs and onto welfare, drives up housing costs, to reduce workplace productivity and fertility. and to fuel resentful tribalism and chaotic diversity.

But the investors who fund and run the AEI gain from the government’s delivery of millions of extra migrant workers, consumers, and renters.

In June, AEI hosted a pro-migration talk where an economic historian cheerfully argued that immigrants’ children do better than Americans’ children.

“Children of immigrants that grow up close to the bottom of the income distribution- so, think about the 25th percentile, for example — are more likely to reach the middle class that children of similar [income] U.S-born households,” author Leah Boustan said at a June 7 presentation.

Ryan is also a long-standing advocate for migration, despite the huge damage it has inflicted on Americans during his lifetime. When President Trump was elected, Ryan worked successfully to derail Trump’s immigration reform proposals, even though it was the main issue — alongside opposition to free trade — that propelled 2016 Trump into the White House.

“We … know that strong bonds of kinship are the very first safety net our species developed. Weak and fractured families spawn big national welfare systems … [But] Current and future immigrants should play an important role in revitalizing America,” says a zig-zag chapter by demographer Nicholas Eberstadt.

There is an argument for favoring highly skilled immigrants in the future, and it has merit. But the grit, drive, and family values of immigrants with little formal education should have a place in our country too. Such strivers and their children make us more dynamic, for talent and entrepreneurialism do not always come with academic credentials

Ryan’s book and agenda are useful evidence that the GOP’s business establishment will not concede any political priorities to Trump and his populist majority.

Many other Trump opponents in the establishment wing of the party are merely shouting against Trump as if they would prefer to lose the 2024 election than see Trump win it on a populist agenda.

Bill Barr, for example, was Trump’s former Attorney General. He just wrote in the New York Post that Trump will wreck the party for his own ego, yet Barr did not urge the party’s establishment to make spending, labor migration, or pro-family concessions to Trump’s voters. Instead, Barr wrote:

Trump’s willingness to destroy the party if he does not get his way is not based on principle, but on his own supreme narcissism. His egoism makes him unable to think of a political party as anything but an extension of himself — a cult of personality.

So far, the shouting has not worked — partly because Trump has a track record of successfully raising wages by cutting migration. But Trump also can use the campaign trail to expand his speeches into a detailed set of policy promises about wages and opportunities for ordinary Americans.

“Trump leads with 55% support in a hypothetical 2024 Republican Primary, followed by Florida Governor Ron DeSantis with a quarter of Republican support (25%),” according to a mid-November Emerson College Polling survey of 1,380 US voters. The Emerson statement added:

Spencer Kimball, Executive Director of Emerson College Polling noted … “There is also an age divide in the Republican primary: younger voters under 50 break for Trump over DeSantis 67% to 14%, voters between 50 and 64 break for Trump 54% to 32%, while Republicans over 65 are more split: 39% support Trump and 32% DeSantis.”

“Paul Ryan has a very clearly defined set of beliefs that have no constituency whatsoever in the electorate,” commented Mark Krikorian, the director of the Center for Immigration Studies. He continued:

He is a voice of the past, and the perspective that he represents is the reason Republicans have been having so much difficulty. The more national populist, or national conservative perspective, is the winning recipe for Republicans. It captures a large part of the middle and center-right of the country.

The problem is that a large share of the Republican elite and Republican donors share Paul Ryan’s perspective. When [they] lose, then these guys just blame the voters — like that Principal Skinner meme; “Am I the problem? No, no, it’s the children who wrong?” … In a democracy, you have to go with the electorate you have, not the one you might wish for.

Good Points in the Ryan Book

The chapters that were not written by Ryan contain many good points — including points already made by Trump while in the White House.

But most of them are buried deep in the chapters — as if the authors did not want them cut out by Ryan or the AEI board.

For example, one author noted that a low-immigration, tight labor market is the best fix for poverty:

Consistent with conservative principles, we argued that the key lesson from the Great Recession is that strong economic growth and a hot labor market do more to improve the economic well-being of the working class and historically disadvantaged groups, including working-age people with disabilities, than does a slow recovery that relies on safety-net policies to help replace lost earnings.

The 314-page book does include a second mention of this desirable goal, perhaps because investors use immigration to prevent the recurrence of a sustained tight labor market.

Some authors include hints of opposition to the immigration favored by AEI’s directors. For example, one chapter notes:

Technological change, the globalization of the economy [trade and migration], and stagnating educational performance and work readiness have conspired to put “good jobs at good wages” out of reach for a growing number of Americans, especially those who live on the social and economic periphery.

The federal government’s weak response to the drug disaster gets a mention: “We see Americans struggle with a loss of meaning and purpose in their lives–and succumbing, for instance, to drug addiction– … no small matter.”

The government should fund parental leave for new mothers and fathers, says author Abby McCloskey. “The lack of paid parental leave has consequences that extend from the health of the baby and the parents (mothers, in particular) to workforce attachment, welfare dependency, and social norms about caretaking,” she wrote.

One chapter recognizes that innovation and competition are often aided when inefficient or dominant companies collapse:

Then there is America’s other big innovation problem: the sclerosis, complacency, and rent-seeking in our private sector, especially in big business. America cannot succeed unless a lot of its firms fail–including some of its largest ones. Bankruptcy and reallocation of resources to more productive ends are the mother’s milk of dynamic growth in a competitive market. There should be no room for corporate welfare in a revitalized America. Bring on the “zombie apocalypse” in our corporate sector. We will not only survive it; we will thrive by it.

Americans — and immigrants — are getting less educated every year, one chapter admits:

The pace of skill acquisition among American workers has simply not kept up with technological change, and, as a result, family-sustaining jobs have gradually moved further out of reach for growing numbers of workers. With the advent of powerful new tools such as artificial intelligence and robotic process automation, the task of synchronizing education, training, and technology is becoming more difficult, not less–especially for those with lower levels of education, training, and skills.

Elites are turning their backs on Americans, Eberstadt wrote in his chapter:

Lately our civil society and our nation’s moral sentiments have been under strain. Confidence in our institutions has ebbed. Distrust of fellow Americans is on the rise. Elite circles wonder, increasingly aloud, whether our American civilization–traditions, ethos, ideals–are actually worthy of them. They might be better served wondering a bit more whether they are worthy of the remarkable system they have inherited. More often than not, it is ignorance of the US political tradition and our fellow citizens–not familiarity with them–that breeds such contempt.