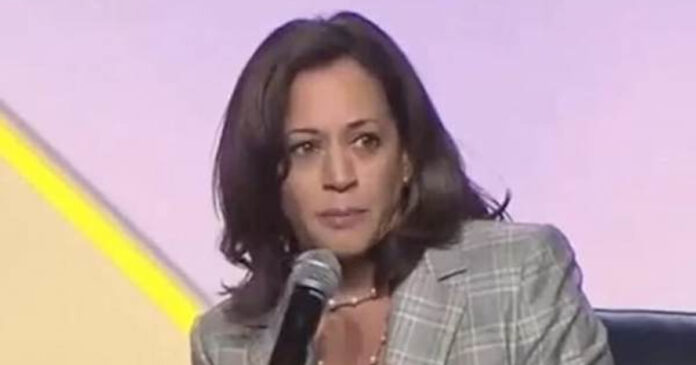 Kamala Harris wants to be a person that others look up to for inspiration. Her desire to be that influential figurehead is causing her to make up things about herself that are just not true. Her lies blind those that think of her as a mentor or positive influence. Liberals are all about the spotlight and not so much about their role to fit into being an elected official.

Democrats love to act like royalty. They parade themselves around in their best dress just to revel in the looks that people give them. And when the spotlight drifts away, they are quick to tell lies about themselves just to get the people to look at them again.

One such story came out of Harris’ mouth.

Harris tried to talk about the time that bled patriotic blood during a civil rights march years ago. She stated that “she remembers being wheeled through an Oakland, California, civil rights march in a stroller with no straps with her parents and her uncle.”

According to her story, her inattentive parents left her for dead in their march for civil rights. This story should be considered a tragedy, and her parents arrested for child endangerment. But as Harris falls out of the stroller, there is not one adult that takes notice of the whiny child.

Harris goes to lie that “My mother tells the story about how I’m fussing, and she’s like, ‘Baby, what do you want? What do you need?’ And I just looked at her and I said, ‘Fweedom.’”

His exact statement was, “I never will forget a moment in Birmingham when a white policeman accosted a little Negro girl, seven or eight years old, who was walking in a demonstration with her mother. ‘What do you want?’ the policeman asked her gruffly, and the little girl looked him straight in the eye and answered, ‘Fee-dom.’”

The Democrats lie, cheat and steal things from others so that they can make themselves look good. The American people do not need someone in the White House that cannot be honest.

Joe Biden and Kamala Harris represent a cancerous problem with liberals. Nothing they have to offer is unique. It has been stolen from others and passed off as original.

The media will never call her out on it because they are in bed with the notorious Democrats. They would not even correct Harris when she stated that she grew up with Kwanzaa.

She stated that “You know, my sister and I, we grew up celebrating Kwanzaa,” Harris claimed. “Every year, our family would — and our extended family — we would gather around, across multiple generations, and we’d tell stories … and, of course, afterwards have a beautiful meal.”

Twitter never fact-checked the liar because they are being paid by big money to keep their mouths shut. If Harris had any morals to her at all, she would be condemning the sad little holiday because of what it represents and who founded it. Instead, she pushes the holiday as something worth embracing even though it was founded by a convicted felon that beat women to death for fun.

The media is so pro-socialism that they are willing to destroy a nation just so they can be paid. They are willing to lie through their teeth and invent stories because it brings in the mighty dollar. Instead of being the fact-checkers and honest reporters, they have turned into a censoring agency working in connection with communist China.

The Democrats want to set themselves up to be legends in the history books. It drives them crazy when stories make them all out to be the bad guys. The liberals in America act no differently than the communists in China that tell lies and hurt people so that they can look good in front of the camera.

America needs a president and legislature that is willing to tell the truth and do what is right. America needs President Trump.