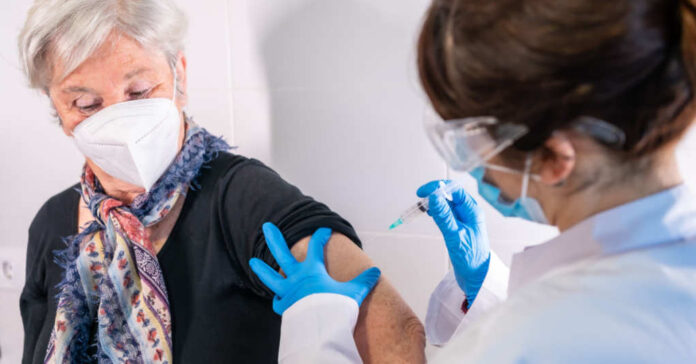 On Wednesday, the group sent a letter to Senate Republican leadership informing them they will oppose moving forward on the National Defense Authorization Act (NDAA), which authorizes spending for the Pentagon if they get a vote on an amendment to the bill that would end the mandate and reinstate discharged troops with back pay.

The NDAA is the main vehicle Congress has to make changes to Pentagon policy once a year.

“Our young men and women in the military deserve better. The Biden administration’s vaccination mandate has forced our nation’s young patriotic men and women to choose between their faith and their career, between their medical autonomy and their career. At a time when the military is struggling to meet their targets for recruitment, the Biden administration is firing soldiers we invested in and trained,” Paul said.

President Joe Biden chats with soldiers and their families during the Friendsgiving dinner with servicemembers and military families as part of the White House?s Joining Forces Initiative at the Marine Corps Air Station Cherry Point one day after his 80th birthday in Havelock, NC, United States on November 21, 2022. (Photo by Peter Zay/Anadolu Agency via Getty Images)

Graham said this was the first time he was voting against cloture of the NDAA.

“It literally is insane to drive men and women out of the military at the time we have recruiting shortages because of our refusal to take this vaccine. At the same time, we’ve had millions of people coming to the country legally without vaccination that are being sent by our own government all over the country. This is not lost on most people,” he said.

He added, “I will not vote to get on this bill unless we have a vote to change this policy. That’s something I’ve never done before. So it makes no sense to me to discharge thousands of people … at a time when we need to get more people in the military.”

Lee noted that one Coast Guard member who is facing discharge was recently praised by President Joe Biden for his rescue efforts during Hurricane Ian, as reported by Breitbart News.

Johnson, who has been leading efforts to overturn the mandate, cited statistics of people who have suffered vaccine injuries.

“To date, there have been 32,220 deaths, reported to VAERs [Vaccine Adverse Event Reporting System] associated with the vaccine, over 1.4 million adverse events,” Johnson said. “The people who are reluctant either for religious reasons or just based on the limited data that we’re getting from our healthcare officials, they have a reason to want to defend their own personal freedom, their own personal health autonomy and decide not to do this.”

He also suggested the Biden administration was violating its own order by giving military members non-FDA-approved vaccines. “I, to this day, have not received any confirmation from the FDA that any fully-FDA-approved vaccines are being administered to our military,” he said.

According to Johnson, approximately 8,000 members of the military have been discharged over the vaccine mandate and another 17,000 are waiting on some determination on their religious exemption requests.

Braun said the military vaccine mandate is one of two top issues he hears about from constituents.

‘That is government gone wild,” he said. “Yes, the NDAA is sacrosanct around here. Sooner or later you gotta start using something when the reason is strong enough to make sure that you’re getting something that needs to be fixed and not just go along to get along,” he said.

Scott said, as a Navy veteran, he has taken many vaccines, but this one is different.

“I took shots when I was in the Navy — I don’t remember one shot I took that had the significant health concerns this has, or something that came up so quickly that there was mandates on it. … We’ve got to acknowledge that our military, men and women have rights, not just our commander in chief. So I think we have got to make sure we listen to them and stop this. We’ve got to stop. We got to prohibit involuntary separation. We’ve got to reinstate these individuals’ backpay,” he said.

Cruz said he suspected the mandate was part of a Biden administration effort to purge conservatives from the military.

“I think they’re using it as an excuse from the enlisted level all the way up to the majors and colonels to the top brass,” he said.