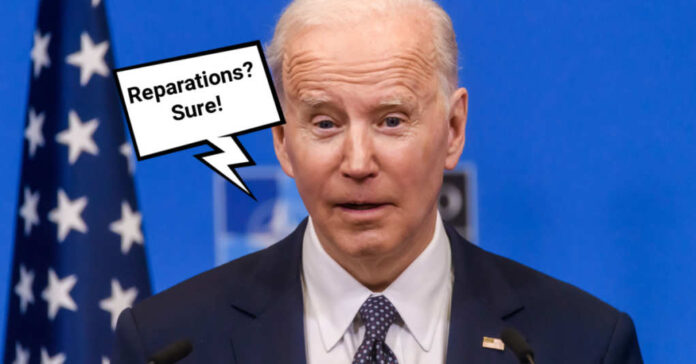 Creepy Joe Biden has done it again. Just when you think he couldn’t possibly embarrass the United States and drag us down an economic hellhole even more than he already has. Biden has committed $1 billion USD to compensate all the poor countries of the world for all that global warming you’ve caused. You might think, “What’s the big deal? Wasn’t Obama always mouthing off about global warming?” Yes, Obama was always mouthing off about global warming. (And transgenders, for some odd reason.) But this is different. By committing actual cash through this latest mechanism, Biden has opened the USA up to liability for global warming. That’s never happened to us before.

First, let’s just look at the absurdity of this new agreement Biden has gotten us into with the United Nations. For years, the UN has wanted to get America to pay into a “loss and damage” fund for global warming, which is fake. Even Barack Obama refused to commit taxpayer money to the loss and damage fund. Why not?

Because it opens America up to liability for global warming. It’s an admission that global warming is all our fault. Even though Joe Biden has committed a billion dollars to this UN loss and damage global warming fund, it could end up costing far, far more than a billion dollars. Poor countries run by dictators can now have their lawyers point to this admission of guilt and sue the US under international law. They can ask for billions or even trillions of dollars, claiming that all the global warming we have caused is hurting their crops or whatever.

It’s like foreign aid, which most Americans hate, but with the receiving countries being able to set the dollar amounts that we have to send them. We know from history that foreign aid is basically a total failure. Most of the cash ends up in the pockets of bad hombres.

A classic example would be Mobutu Sese Seko, the former dictator who destroyed the Democratic Republic of Congo (formerly Zaire). Seko died in 1997. But while he was running Congo, the US used to send the guy billions of dollars in foreign aid because his people were always starving. They were starving because of Seko’s policies, but whatever. Seko used to convert the foreign aid to cash, fly it to Europe on a private jet, and deposit the money in his own bank account. The guy literally became a billionaire because we kept stupidly sending him foreign aid.

Every kleptocrat and dictator on the planet just stood up and took notice when Joe Biden announced that global warming is our fault. They’ll now be able to sue us for trillions of dollars. At the UN. Is anyone wondering how the UN will rule on those cases?

One country that won’t be paying into the UN’s loss and damages fund, because they’re not stupid, is Communist China. That country is an actual polluter. If global warming was real, which it’s not, Communist China would be the one causing it. Most of their electricity is from coal, and their population is about 4 times the size of ours. Have you seen the air in many of China’s cities on days when there’s no breeze? It’s pretty bad.

China’s economy is now on par with America’s based on market exchange rates. They’re a rich country. But they’re not paying into the loss and damage fund for global warming.

The only possible bright spot in this latest bungle from Team Biden is that Republicans will control the House starting in January. As long as the GOP doesn’t pay anything out for the UN loss and damage fund, American lawyers might be able to argue that there’s no admission of guilt on America’s part. But we’ll see.