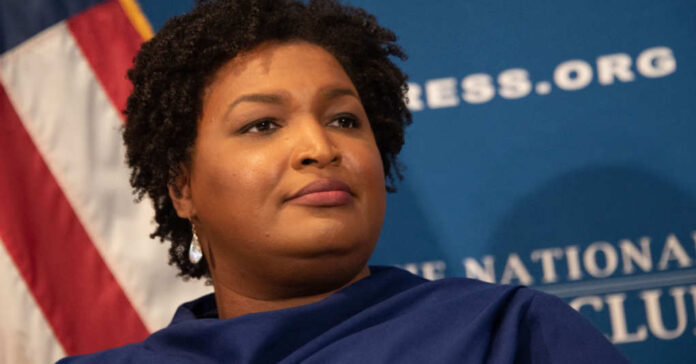 The honeymoon is over for Stacey Abrams and her relationship with the Democratic Party. The bond between them was at one time solid, but after this last election cycle, the party is ready to say goodbye to their once-powerful politician.

The Atlanta Journal-Constitution indicated that Abrams is now being shown the way to take a long walk off of a short pier.

The separation began when Abrams’ top aide ventured out with boldness and began blaming everyone but Abrams for getting beaten down by eight points in the same state that Democrat Raphael Warnock won.

The position that Abrams’ aide took was called a “delusional rant” by one Democratic consultant. They also said that Abrams seemed to be consumed with approval from the Manhattan cocktail circuit. In contrast, they said Warnock was focused on the people of Georgia, so state Democrats are ready to turn the page on Stacey.

Stacey Abrams has stayed out of the spotlight since her rematch against Gov. Brian Kemp ended in a resounding defeat. Her top aide, Lauren Groh-Wargo, broke her silence with a 52-part social media post that came just as the Democratic Party was celebrating the runoff victory of U.S. Sen. Raphael Warnock. He was the party’s only statewide winner in Georgia.

Groh-Wargo framed her rant as though Abrams was a political martyr whose efforts paved the way for Warnock’s victory.

“What @staceyabrams created to lift up voters of color, defend democracy & help other leaders became a launching pad for some & her millstone- weighing down her numbers & costing her the election of 2022,” Groh-Wargo wrote in the first tweet.

State Rep. Derrick Jackson said that he did not agree that the gubernatorial race was winnable for Abrams. “She’s a terrible candidate masked by the fawning praise of a national media that doesn’t know itself from its own shadow,” Jackson declared.

Abrams just took an unwarranted bow; now it is time for her exit from the stage.