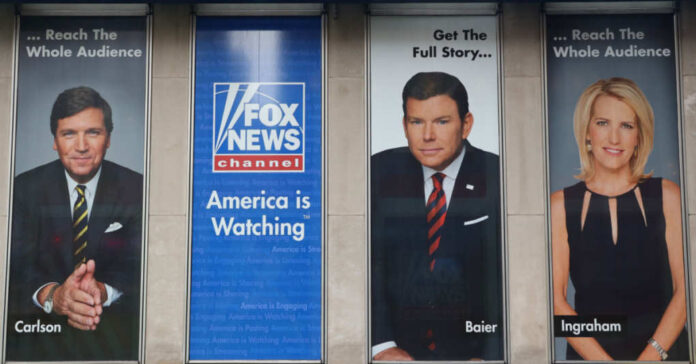 As we bring in the new year, it’s time to reflect on the year we just left and see how we faired. For individuals, this usually means making those overly enthusiastic New Year’s resolutions in the hopes of making a better future. For businesses, it means compiling data and comparing it with how they did in the year prior and then making resolutions for the coming year.

And for leading cable news outlets, that means looking at rating first and foremost.

As you likely know, Fox News’s “Tucker Carlson Tonight” show has held the leading spot for ratings for some time now, much to the chagrin of the political left.
Carlson, as the show’s host has year after year, never failed to bring in viewers from just about all walks of life. Unlike many media outlets and shows, Carlson focuses on various issues. In particular, he is known for taking on topics that most tend to shy away from, as they are quite controversial and have made quite a mess of other journalists’ careers.

However, Carlson always seems to handle them with ease, humor, and rawness, which is otherwise lacking in the media industry. And it is for this that the people love him, especially conservatives.

But it would appear that his numbers have fallen somewhat this year. (Insert progressive leftist applause.)

Well, that’s not entirely true. In fact, according to Yahoo News, Carlson’s show averaged about 3.3 million viewers in 2022, which is actually up by about three percent compared to 2021. However, it did end up coming in second place when looking at the ratings.

Again, I hear the left cheering…

Well, because the show that took the number one spot isn’t exactly a picture of leftist support. And neither is it owned by a leftist-backed outlet.

That’s right. Fox has the leading show again. This time it’s “The Five.” Coming in with an average of about 3.5 million viewers for 2022, it’s a viewership increase of about 17 percent from 2021.

If you haven’t heard or watched the show, it’s basically more of a round table discussion that features a panel of five pundits who talk about topics from the day’s news. And given the variety of news topics covered, the show has seen quite a bit of success in attracting all sorts of viewers, including a healthy number of those who identify as Democrats and/or independents.

What this means is that viewers aren’t running to liberal media outlets like CNN to get their news. Instead, they are time and time again turning to an outlet and shows that have a much more conservative point of view. And then they return to those shows.

As a result, America’s past favorites, those more left-leaning networks, continue seeing a drastic drop in ratings and viewership.
Take CNN, for example.

Once rated as one the best ever, the network has seen such a fall over the past couple of years that they’ve been forced to dream up some rather extraordinary and out-of-the-box attempts just to keep up with its competition. And pretty much everything has fallen flat on its face. One of the more recent examples of this was the network’s launch of a new streaming service called CNN+ in 2022.

However, after just a couple of weeks, the service was forced to shutter due to abysmally low numbers of subscribers. Of course, this was after the network had put forward some $100 million to produce and promote it.

And things haven’t faired any better in recent years for MSNBC either.

Of course, none of us should be surprised at this, right?

I mean, these are the very same networks that have literally been caught in multiple lies over the past few years. For example, remember the Kyle Rittenhouse drama? CNN made sure he was painted as a trigger-happy white supremacist hell-bent on killing. Meanwhile, the justice system acquitted him of all crimes and ruled his actions as self-defense.

And how can we forget about these outlets quickly and quietly sweeping the whole Hunter Biden laptop scandal under the rug, possibly affecting the election of a US president?

No wonder Americans don’t trust these outlets with their time or attention. It’s no wonder Fox and conservative shows have risen to the top.