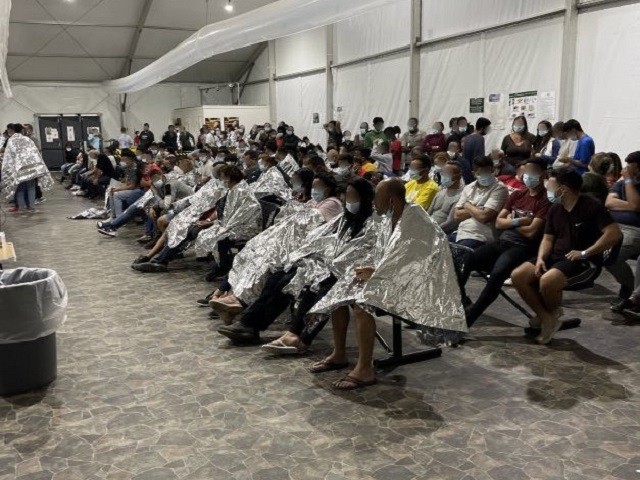 Over 2.75 million came into the United States illegally over a twelve-month period ending September 2022, more than 1 million more immigrants the previous 12 month period. Given these numbers, should the administration continue its current policies or issue new, stricter policies to reduce the flow of people coming across the border?

In response, 81 percent of Republicans and 68 percent of swing-voting independents called for stricter policies.

Just one-third of all voters were content with current lax border policies once they learned the real numbers, according to the poll

A prior question showed just 56 percent of independents disapproved of Biden’s lax policies.

The problem and opportunity for Republicans is that the establishment media hides the scale of Biden’s migration, as well as the pocketbook impacts on American families. Establishment media outlets also refuse to sum up the annual inflow of legal and illegal migrants and instead prefer to treat illegal migration as a non-economic issue of civil rights or of law and order.

The poll also showed that the public — including Republicans — grossly underestimate the scale of migration.

In 2022, Biden’s deputies allowed almost two million southern migrants to enter the country alongside more than one million legal immigrants and visa workers. The total 2022 inflow of more than three million was close to the number of 3.6 million births in 2021.

Harvard CAPS/Harris PollThe public’s misunderstanding is expected because many establishment media outlets hide the numbers, usually by saying that Biden is allowing only “thousands” of migrants to cross — not “hundreds of thousands” or “millions.”

For example, Politico.com reported in December that “Over the last month, thousands of migrants have crossed into the U.S. at the Texas border ahead of the expiration of Title 42.” But in late December, Bidens’ deputies quietly admitted that 230,740 migrants were registered crossing the border during November. Officials allowed 166,756 to stay and get jobs and homes in the United States.

In November, the New York Times reported that “in recent months, the United States had allowed thousands of Venezuelans to enter the country and ask for asylum.” But that language downplayed the huge number of Venezuelan migrants — even though the federal government shows that 85,000 Venezuelans entered during the prior five months.

“It certainly seems that the corporate media is largely on board with trying to obscure the extent of the problem,” said Robert Law, director of the Center of Homeland Security and Immigration at the America First Policy Institute:

We have a government and a lot of special interest groups go out of their way to obscure it, to hide what the real levels are by talking about the problem in the abstract. That just allows people to reach their own conclusions, and they tend to low-ball the numbers compared to reality ….

The [media] people who write [immigration] articles are well aware of the outrage that would actually happen if it was quantified properly.

However, both Republicans and Democrats also try to minimize the scale and impact of the migration.

Both parties rely heavily on donors who support the continued importation of more wage-cutting workers, revenue-boosting consumers, and rent0-spiking renters.

The GOP’s avoidance was spotlighted by a December 21 press conference where six Republican senators complained about the civic impact of illegal migration — but said nothing about the pocketbook damage to Americans.

Throughout 2021 and the 2022 election, nearly all Republican politicians declined to mention the pocketbook damage of migration, despite promising polling data.

Biden’s massive inflow of at least three million migrants is far above what Americans want.

An April 2021 poll by the pro-migration CATO Institute showed that almost half of Americans want just less than 100,000 migrants per year. Another 42 percent favored somewhere between 500,000 and one million migrants per year.

In fact, the current inflow is so great that 52 percent of independents, 72 percent of Republicans, and even 41 percent of Democrats say Biden is “creating an open border [not] just trying to enforce immigration laws more humanely.”

A poll in July showed that many Americans view Biden’s migration as an invasion. Breitbart News reported:

Almost half of Hispanics, blacks, and Asians believe President Joe Biden’s global invite has created an “invasion” of migrants, says a July poll by Ipsos.

The shocking result shows the breadth of public opposition in the poll, which also showed 54 percent of all Americans describe Biden’s migration as an “invasion.

The “invasion” view is mainstream: 58 percent of white Americans — and 40 percent of Democrats — say Biden’s global invite is an invasion, according to data released on August 19 by Ipsos.

The public thinks Biden’s inflow is also boosting drug smuggling, the Harvard Harris poll showed. Seventy-seven percent of Republicans and 60 percent of independents say that “the Biden border policies are increasing the flow of drugs and crime to the United States.”

The federal government’s supply of imported wage-cutting workers has also shifted job-creating investment away from heartland states and towards wealthy coastal states, such as Florida, California, New York, and Texas.