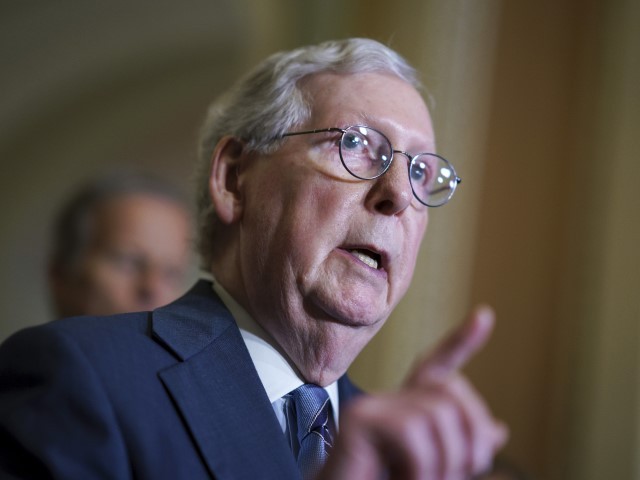 “Providing assistance for Ukrainians to defeat the Russians is the number one priority for the United States right now according to most Republicans. That’s sort of how we see the challenges confronting the country at the moment,” McConnell claimed.

In November, McConnell worked against House conservatives to push the $1.7 trillion omnibus bill through Congress. House Republicans objected to the omnibus bill because it provided funding for the whole fiscal year. As an alternative, House Republicans argued for a short term spending bill so they could have more input after the new Republican House majority took office in January.

Sen. Rand Paul (R-KY) points to a cart with a printed copy of the proposed federal omnibus spending legislation for FY 2023 that he brought to a news conference with (L-R) Sens. Rick Scott (R-FL) (not seen), Ron Johnson (R-WI), and Mike Lee (R-UT) at the U.S. Capitol on December 20, 2022, in Washington, DC. (Chip Somodevilla/Getty Images)

Kelly Tshibaka, a Republican, looks on Thursday, Oct. 27, 2022, prior to a U.S. Senate debate in Anchorage, Alaska. (Mark Thiessen/AP)

In August, the Senate Leadership Fund suddenly canceled about $8 million worth of ad buys in Arizona. The cancellation hurt Republican candidate Blake Masters’ chances of defeating Sen. Mark Kelly (D-AZ), who went on to defeat Masters by a narrow margin.

Blake Masters, running for the Republican nomination for U.S. Senate from Arizona, speaks at a Save America rally Friday, July 22, 2022, in Prescott, Arizona. (Ross D. Franklin/AP)

McConnell claimed in September that inflation was one of the top three greatest midterm issues. Yet he and the Washington, DC, establishment worked against conservatives to pass several massive spending bills that fueled soaring costs for American workers.

From 2021-2022, McConnell voted for the $1.7 trillion omnibus spending, $1.9 trillion for COVID-19 corporate bailout, and the $1.2 trillion “infrastructure” bills – all items of legislation that have fueled inflation, according to experts.

In September, McConnell refused to condemn Biden’s speech in Philadelphia that labeled “MAGA Republicans” a threat to the nation.

“MAGA Republicans do not respect the constitution,” Biden claimed. “They do not believe in the rule of law … they do not recognize the will of the people.”

“They promote authoritarian leaders and they fan the flames of political violence that are a threat to our personal rights, to the pursuit of justice, to the rule of law, to the very soul of this country,” he added.

Five days after the speech, McConnell’s office refused to respond to Breitbart News’s request for comment.

“The American people want their constitutional rights protected and their kids to be safe in school. They want both of those things at once,” McConnell claimed. “And that is just what the bill before the Senate will help accomplish.

President Joe Biden holds pieces of a 9mm pistol as he speaks in the Rose Garden of the White House in Washington, Monday, April 11, 2022. (Carolyn Kaster/AP)

In March and September, McConnell opposed conservatives and voted for massive amounts of Ukraine aid. American taxpayers shelled out $14 billion in March. That sum was added to in September by $12.35 billion. In total, McConnell and the Democrats have voted to give over $100 billion of taxpayers’ money to Ukraine.