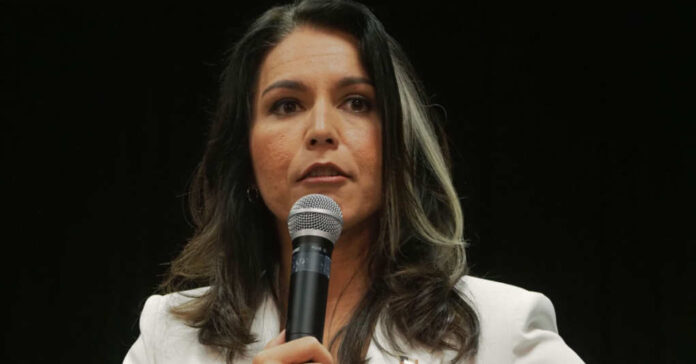 Tulsi Gabbard went prime time on the Fox News channel subbing for Tucker Carlson this week. She had Rep.-Elect George Santos (R-NY) on the show as a guest and she cut loose on him about the lies he told during his campaign.

Gabbard began the intense interview by talking about several Democrats who told lies about their “humble” beginnings, Sen. Dick Blumenthal (D-CT) and Sen. Elizabeth Warren (D-MA). Despite their lies, they were defended and propped up by the Democratic Party.

Gabbard said that Santos has admitted to lying about his background by saying that he graduated from Baruch. She noted that he said he was Jewish when he was Catholic. And he defended his statement by explaining that his mother’s side of the family was Jewish, so he was just saying he was “Jew-ish.”

When Gabbard decided to take the offensive with Santos, it got brutal. She began by asking him what integrity meant.

“It means to carry yourself in an honorable way,” he answered. “And I made a mistake. And I think humans are flawed and we all make mistakes, Tulsi. I think we can all look at ourselves in the mirror and admit that once we’ve made a mistake. I’m having to admit this on national television for the whole country to see and I have the courage to do so.”

If he had been a Democrat, that probably would have been the end of the whole thing. The liberal media host would have glossed over any residue of impropriety and talked about the person’s “bravery.”

But that’s not Gabbard. She said, “The thing is, Congressman-Elect, integrity means yes, carrying yourself with honor. But it means telling the truth – being a person of integrity.”

She continued by asking him if he had any shame, and Santos was left stammering.

She ended by declaring she did not know how any of his constituency could trust him now.