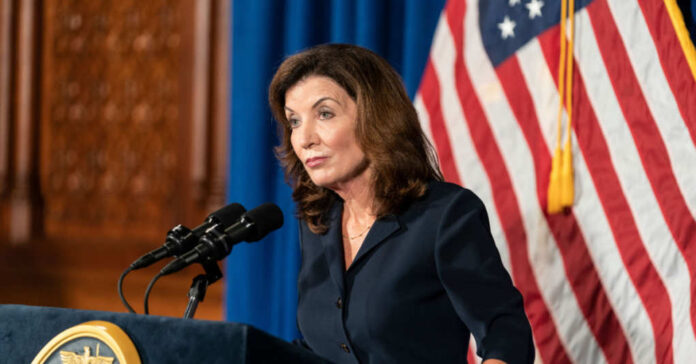 There comes a point in all of our lives when we realize that what we wish for might not be nearly as great as we thought. Going along the lines of the truth that the grass is not always greener on the other side, we sometimes need to be careful of what we wish for.

And for Kathy Hochul, New York’s newly re-elected governor, no truer statement could be said at the moment.

You might remember that during her months of campaigning to stay in the governor’s mansion, she made one specific speech that suggested that only Democrats and liberals were welcome in her state. In fact, she quite literally told Republicans to “jump on a bus and head down to Florida where you belong.”

Basically, what she meant was that New York was a state for her kind, Democrats. And as such, no one who didn’t agree with her politics or the party’s agenda would be tolerated. Sounds quite tyrannical, right?

Well, it appears she might have just gotten that wish. Only it might not be quite the dream she imagined.

As the New York Post reported at the time, her demands for GOP members to leave the state was really just aimed at former President Donald Trump, her GOP rival for Governor Lee Zeldin, and then GOP congressional candidate Marc Molinaro.

Of course, it didn’t come out so pointed. Instead, it sounded as though any New Yorker who didn’t side with liberal agenda talking points should leave the state.

And sadly for Hochul, it seems a good number followed her advice.

Of course, most didn’t have to be told by her to do so. Thanks to liberal crime reforms, rampant homelessness, and policies that no longer protect the people, people of all walks of life have been not so slowly leaving the state for years.

The trend first became more noticeable during the pandemic, when oppressive measures were put in place that left many without jobs, education, or even social lives. It quickly became the most vacated state in the nation. Other states, and decidedly liberal ones like California and Illinois, also saw the same trends.

But while those other states recovered somewhat after the end of the pandemic, New York has continued to lose people at a rather terrifying rate. Still, to this day, it leads the nation in population decline. And just as she wished, states like Florida lead in population growth.

New York has lost enough people, in fact, they are now also losing representation in Congress.

Another problem the state is having is that of those who are left in the state, a growing number of them are a bit more socialist in tendencies.

This means that like America’s most famous socialists, Bernie Sanders and Alexandria Ocasio-Cortez, while they are quite vocal about what they want, they aren’t exactly known for their productivity. And that means they can’t exactly be taxed to pay for all of Hochul’s agenda items.

Also left in the state are groups such as Black Lives Matter, Antifa, and Planned Parenthood, all of which seem more interested in producing crime and death than bettering communities.

While Hochul might have wished for such supporters during her campaign, she’s likely second-guessing that wish now that the reality of her win and the state’s declining population.
In fact, she even suggested as much during her inaugural speech on Sunday.

According to Fox News, Hochul proclaimed that one thing she now wants to accomplish is to “reverse the trend of people leaving our state.”

But to do so, she will have to give up on a good number of her campaign promises to liberals. Thousands of those who have already left have learned the truth for themselves; Republican leaders like Hochul’s opposite in Florida actually support freedom and a life well lived. New York leaders seem to only want more power and money.