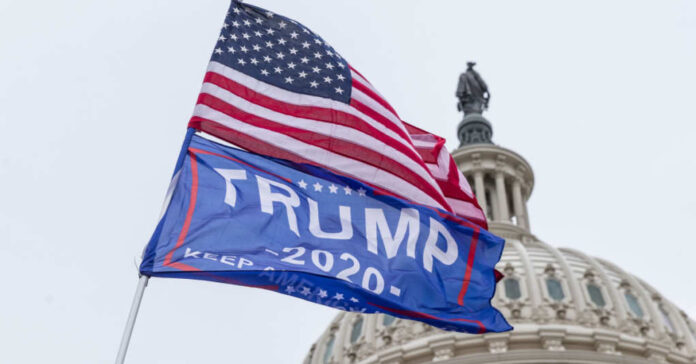 Rep. Kevin McCarthy (R-CA) has promised to release 14,000 hours of surveillance footage from the January 6 stolen election protest that took place two years ago. This was one of the concessions he made to become the new Speaker of the House, and it looks like McCarthy will keep that promise. Legal experts are now pointing out, however, that the House GOP has the constitutional authority to do much more than that. They can release the peaceful J6 protesters that the Biden regime is holding as political hostages.

Since the stolen election protests two years ago, the Department of Justice and the FBI have been expending a tremendous amount of resources to arrest the mostly peaceful protesters and wreck their lives. Dozens of protesters – nearly 70 at last count – have been kept in solitary confinement for two years, despite only being charged with misdemeanor crimes. Not convicted – but charged.

And the crimes they are charged with are absurdities: Trespassing in a public building which they (the protesters) own, “parading” through the Capitol, and briefly interrupting a ceremonial meeting of the US Senate. Many have been charged with nonsense crimes, rather than felonies.

The FBI is no longer investigating child sex trafficking crimes at the US-Mexico border because Merrick Garland has ordered agents to only focus on tracking down more January 6ers. Protesters are still being arrested to this day. 20 Republican Senators betrayed America last month by voting for the $1.7 trillion Omnibus bill, which gives Garland and his thugs additional funding to arrest another 1,000 January 6 protesters this year.

But some legal scholars are now arguing that the majority House Republicans have the authority to let the January 6ers off the hook. At issue is Article I, Section 8, Clause 17 of the US Constitution.

That clause stipulates that one of the enumerated powers of the Congress is to regulate all “Forts, Magazines, Arsenals, dock-Yards, and other needful Buildings.” That would certainly, argue some legal scholars, including the Capitol Police and any prisons in Washington, DC, and any prisoners held in those prisons.

Dozens of protesters have been denied bail for two years now, and have been held in solitary confinement in the notorious Washington, DC jail. A wing of the prison that had been closed down for years was reopened specifically to house the January 6 prisoners. As Members of Congress like Rep. Matt Gaetz (R-FL) and Marjorie Taylor Greene (R-GA) have noted, the jail has black mold on the walls, many of the toilets don’t work, and the conditions are similar to a Soviet-era gulag.

Prisoners are routinely beaten by the guards and subjected to racial epithets on a daily basis (most of the jail’s guards are black). Some have been sexually assaulted by the guards. One prisoner was blinded in one eye because he was punched so hard by a guard that his eyeball popped out of the socket.

Needless to say, this is not how the American “justice” system is supposed to work against people who are supposed to be presumed innocent until proven guilty.

Attorney David Clements argues that House Republicans have the constitutional authority to release all of those prisoners today.

Clements states, “Your elected representatives, now led by a Republican majority, should be lobbied 24/7 for the immediate release of those imprisoned in the DC gulag now.”

President Trump has voiced support for this plan as well. He’s announced on the campaign trail already that he plans to pardon most if not all of the protesters once he’s reelected in 2024.

It’s a travesty of justice that these people have been imprisoned for two years after only being charged with nonsense misdemeanor crimes. Even if they were convicted at trial, most of them would not receive a sentence that heavy. It’s time for the House GOP to let them all out.