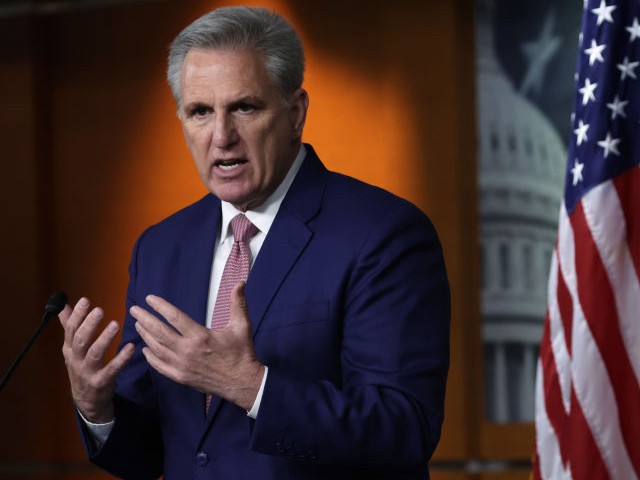 The reporter, PBS Newshour’s Lisa Desjardins, compared embattled Rep. George Santos (R-NY) to Swalwell and Schiff, saying, “You have said that lying to us is something that means you should be removed from the Intelligence Committee, but why is it not a factor [for Santos]?”

The question came after McCarthy had just announced he would reject House Minority Leader Hakeem Jeffries’ (D-NY) selections of Swalwell and Schiff to the Intel Committee and after the Republican Steering Committee placed Santos on two low-profile committees whose members do not have access to classified information in the way that Intel Committee members do.

As McCarthy began explaining that Santos had been elected by his district, Desjardins cut him off and said, “You’re not answering my question.”

“Why is lying one standard for Democrats and another for Republicans?” Desjardins asked.

McCarthy responded, “Let me be very clear and respectful to you. You asked me a question. When I answer it, it’s the answer to your question. You don’t get to determine whether I answer your question or not, okay, in all respect.”

McCarthy said rejecting the pair of California Democrats from the panel was a matter of “national security.”

Schiff, while serving as chair of the Intel Committee, perpetuated the Trump-Russia collusion theory, which the Justice Department later shut down as false. Schiff once said he had “more than circumstantial evidence” of collusion, ultimately leading all GOP members of the committee to call for his resignation as chairman.

Schiff, while serving as the lead impeachment manager in the first impeachment against former President Donald Trump, also took heat for reading out a made-up call between Trump and Ukrainian President Volodymyr Zelensky for dramatic effect as Democrats moved to impeach Trump.

Swalwell, for his part, was found by the FBI to have once had ties to a Chinese spy named Fang Fang.