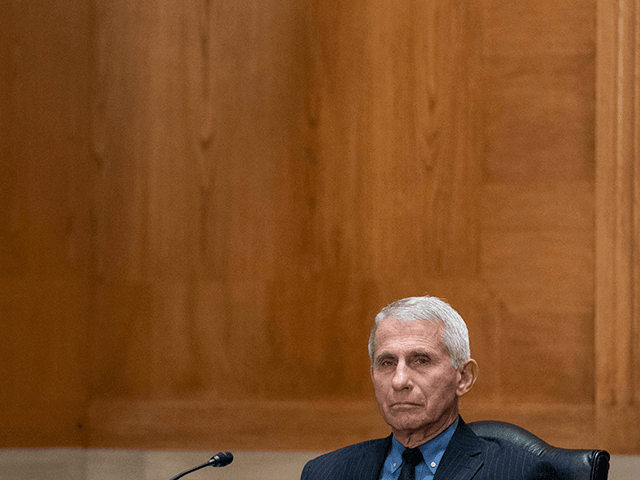 Marshall spoke to Breitbart News Saturday host Matthew Boyle as Fauci’s recently released emails to the public show that he voiced skepticism about the effectiveness of masks and that the coronavirus may have come from a laboratory in Wuhan, China.

The emails’ release has led some of Marshall’s colleagues, such as Sens. Rand Paul (R-KY) and Marco Rubio (R-FL), to call for his firing or resignation.

“Those emails are very damning. He was withholding information and not being forthright with the President of the United States and with the American people. My dad taught me that when you lose the reputation, he’s going to be a very ineffective adviser to the president and certainly very ineffective to the American people right now. I think Dr. Fauci should do the right thing and resign, and I’m sure they’re planning his retirement party right now as we speak,” Marshall said.

Boyle noted that Fauci has resisted requests to come onto Breitbart News Saturday regarding his thoughts about the coronavirus pandemic and that the offer still stands.

Boyle then said that Fauci has spoken to MSNBC host Rachel Maddow, saying that attacks against him are really an attack on “science.”

Marshall disputed Fauci’s claim, saying that the highest-paid federal bureaucrat’s decisions are based largely on politics and covering up potential crimes.

He said, “His decisions are based on politics and covering up a huge potential crime, ok. So his decisions are based upon the fact that he loved viral gain of function. I mean, he’s giddy about it in some of his past reports, and he releases that we taught China how to do viral gain of function. We had the earlier SARS virus, slap a protein spike on it that loves human lung cells, so all of his decisions going forward were not based on science; they were based on covering his trail; he was complicit in all of this. There’s very little science in his decision… mixed messaging, he’s not done a good job for applying science, he’s in trouble.”

Marshall added that he was “very proud” that efforts to investigate the origins of the coronavirus pandemic had gained bipartisan support.