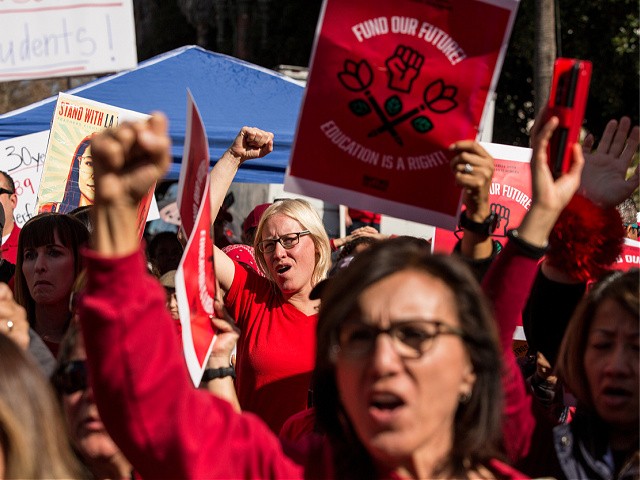 According to a report in the Los Angeles Times Saturday, the resolution will also ask its members to vote in favor of “the international campaign for boycotts, divestment, and sanctions against apartheid in Israel.”

I move that UTLA denounce the recent bombings in The West Bank and Gaza by the Israeli resulting in the deaths of hundreds of civilian people, mostly women and children. The high intensity aerial warfare is unjust and inhumane. Palestinians have the right to self-determination free of violence and occupation. UN Resolution 194 asserts their right of return to their homes, unjustly seized by the Israeli government Israel must stop evictions of Palestinians currently taking place in East Jerusalem and end its 55-year old military occupation of The West Bank and Gaza strip.

Our tax dollars should go to public schools and healthcare not incessant warfare against an indigenous people in the Middle East. UTLA should unite with and stand up for workers everywhere, especially the most oppressed of them, especially as the Palestinian Federation of Trade Union of Gaza urges solidarity. The World Federation of Trade Unions has also denounced the attacks against Palestinians. It is time we do, too.

On Tuesday, however, UTLA released a statement explaining that motions expressing “concerns” about the “Israeli-Palestinian conflict” were “debated and discussed, and they passed in some of the Area meetings” but “did not pass in all of the meetings.”

As educators, it is our job to create nurturing, safe environments for all of our students. UTLA stands against racism, sexism, anti-Semitism, xenophobia, homophobia, Islamophobia, and oppression in all forms. We stand against both anti-Jewish hate and violence and anti-Arab hate and violence wherever they occur, and we denounce the recent attacks on Jewish people in Los Angeles.

The Times reported the above statement was released in response to a letter sent to the union by the regional Anti-Defamation League.

Shella Sadovnik, litigation counsel at the Freedom Foundation, a national organization that fights government union abuses, said in a statement:

[I]t is unconscionable that after a year of sacrificing our children’s education and well-being on the altar of their leftist political agenda to defund the police, ban charter schools and raise taxes on California residents, UTLA is now wasting taxpayer resources to condemn Israel, causing further political division at a time we need it least.

“Los Angeles has the second-largest Jewish community in America,” Sadovnik observed. “UTLA’s statements in light of the recent anti-Semitic attacks is unfathomable. Moreover, union leaders are callously alienating and isolating Jewish teachers and students, who are already feeling anxious about being labeled.”

In May, the San Francisco teachers’ union adopted a resolution to express “solidarity with the Palestinian people and call for Israel to end bombardment of Gaza and stop displacement at Sheikh Jarrah.”

The union called on the Biden administration to end aid to Israel and to endorse the international campaign for boycotts, divestment, and sanctions against Israel.

“The teachers union has failed in its most basic mission this year, opening schools and educating San Francisco’s children,” said parent Todd David, who is Jewish. “Instead of focusing on that, they are weighing in on an international political land dispute that experts have been unable to resolve for 70 years.”