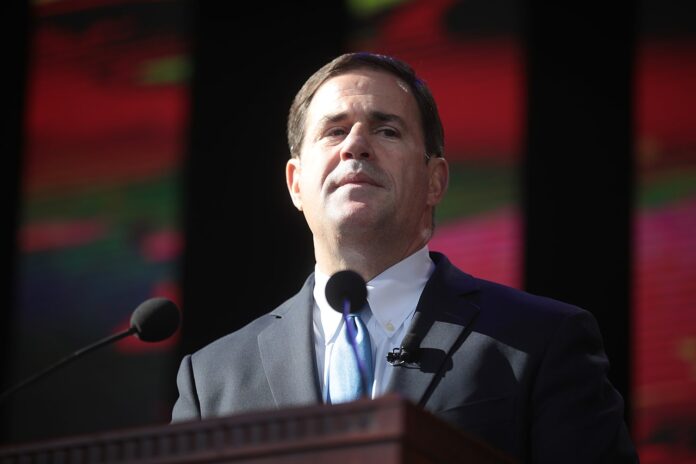 With an ever-increasing partisan divide in our nation, it’s pretty easy for one side to see everyone on the other side as an enemy and with no redeeming qualities, as Biden has said of Trump. However, as some Republican lawmakers have proven as of late, it’s not just the other party who is quite adept at throwing punches at their own.

On Friday, Ducey had 22 bills placed on his desk for signatures that would make them into law. One would have banned dangerous critical race theory from being taught in all Arizona schools. Another would have promoted election integrity and security.

But for Ducey, it apparently didn’t matter what the bills consisted of or just how bipartisan they were. He vetoed them all.

And yes, I mean all of them.

Why? Well, as Ducey explained on his Twitter account, he was upset that the state legislative chambers had not yet approved of his $12.8 billion budget. And so he threw what can undeniably be called a temper tantrum and vetoed every single bill put on his desk.

He wrote, “Today, I vetoed 22 bills. Some are good policies, but with one month left until the end of the fiscal year, we need to focus first on passing a budget. That should be priority one. The other stuff can wait.”

Now, as you can see, Ducey actually supports and likes a good number of those bills. After all, both the state Senate and House of Representatives are GOP-led, albeit by only one vote.

And yet, because he’s not getting his way with the budget at the moment, he just threw months of bipartisan hard work and effort down the garbage chute.

As chairwoman of the Arizona Republican Party noted, it’s a rather “ridiculous” move.

“Twenty two bills that the legislative branch worked all session on. Bills that went through the process & passed & went to the executive’s desk. This tyrannical approach is dangerous to what #WeThePeople in AZ support.”

Like fellow Republicans Mitt Romney and Liz Cheney, it seems Ducey now cares more about himself and his power than what his constituents actually need or want.

Right now, he wants a budget passed, and preferably one that includes a lot of pork, according to Republican state Representative Mark Finchem.

Finchem recently spoke to Steven Bannon on his “War Room” podcast, saying, “He vetoed a bill that would have prohibited the teaching of critical race theory to government employees. That is absolutely outrageous. Then we go on to a budget that’s got so much pork in it you’d think we were going to a barbeque.”

As Finchem says, Republicans and Democrats have tried to work with the governor all session long to get a budget approved. Still, time after time, the one proposed by Ducey includes giving overly generous and “big, fat gifts to some of his cronies.”

And so, the GOP’s slim majority has been reluctant to agree on one thus far. The last time the legislative houses proposed to vote on the matter, it effectively went nowhere, causing both houses to adjourn until June 10.

“So now, in retribution, he decides to veto a bill that would do with election integrity, teaching critical race theory.”

But what Finchem says makes this even worse is that, as Ducey himself even mentioned in his tweet announcing the vetoes, the budget doesn’t actually have to be agreed on quite yet.

“We don’t have to have a budget until July 1. We’ve got basically 30 days yet to do the budget. So for him to do something like this is beyond the pale.”

This leads those like Finchem to call this move nothing more than a “man-child temper tantrum” and another attempt “to act like a petty dictator, which, by the way, seems to be his MO since the beginning of the year.”

Finchem explained to Bannon that this isn’t the first time Ducey has acted in his own interests and not those of his state.

“We need to remember, Steve, that back in January, the Republican leadership – and I’m talking about the state committeemen – two-thirds of them voted to censure this governor for his behavior on a number of laws.”

And yet that vote apparently taught Ducey nothing, as he is here, once again, trying to make sure he and his friends get what they want before anyone else in the state is considered. How very Democratic of him…