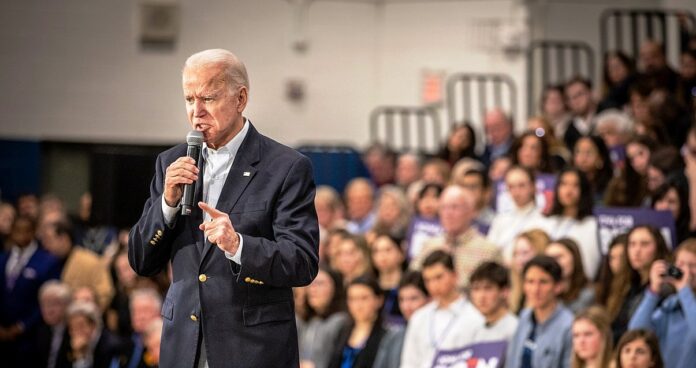 Democrat governors and Republicans In Name Only (aka RINOs) were responsible for the draconian lockdowns that have laid waste to the American economy. To make matters even worse, Pelosi and McConnell spent the whole year arguing over whether Americans even deserved a stimulus payment for their troubles.

They earned millions this year to sit around and debate as to whether the average American even deserved a measly $600. It’s beyond sad. Joe Biden should be coming in and cleaning up this awful mess so that we can finally come together as a country. That’s not what Biden and other Obama era cronies are interested in, though.

Biden is looking to make the divisions even worse. He’s decided to give African-Americans, Latinos, Asians, and Native Americans a head start on rebuilding their small businesses. White small business owners are not being given the same opportunity because Biden does not want us to move forward as a unified nation.

“Our priority will be Black, Latino, Asian, and Native American owned small businesses, women-owned businesses, and finally having equal access to resources needed to reopen and rebuild.” — President-elect Biden pic.twitter.com/pIyDuhf5pH

“Our priority will be Black, Latino, Asian, and Native American owned small businesses, women-owned businesses, and finally having equal access to resources needed to reopen and rebuild,” said the president-elect. Biden might think that this is one of the most woke steps that a president can take.

In the reality that the rest of us are sharing, this seems a bit racist to the groups he is claiming to try to help. Why would he act like these people are unable to help themselves? This is going to backfire on him badly when he is called out by the social media outrage mob. Honestly, who does he think that people are going to be directing their ire towards now that Trump has banned from any possible communication platform?

All the silly controversies that fell into the mean old orange man’s lap over the past few years are now going to become Biden’s problem. There’s no one left for them to blame. If Mitch McConnell is able to stay out of the way and allow the initial stimulus bill to go through, there’s not much left for Biden to worry about.

He’ll need to make some better decisions going forward before the same leftists who have been eating out of his hand start to ask more questions. He’s going to become Public Enemy #1 before he knows it. It does not matter how many checks he hands our or how many programs he starts. Biden will simply have to straighten up and fly right.

Surely, he is going to get a honeymoon period with the liberals. The Democratic presidents always do. You already know about the types of things that we are going to hear. For a while, people will be unwilling to criticize Biden in any meaningful way because the mainstream media will say that anyone who says boo about him is a Trump supporter.

That mentality cannot last forever, though. Eventually, the leftists are going to get tired of not having anything to complain about and they are going to turn on Biden. When they do, these are the sorts of divisive programs that they are going to be focused on. He has yet to see what it is like when all of social media seems to be calling for your head.

The Trump pinata has been put away by the mainstream media. If anything, this was a worst-case scenario for Biden. He does not have his human shield to take everyone’s attention away and he will have to make Americans happy without pointing the finger in his direction every two seconds.

He’d better hope that Trump starts doing rallies and gets a platform to continue sharing information on. Otherwise, he is going to be left to do a whole lot of stuttering and stammering once he’s the one who is placed on the hot seat for a change. The mainstream media Trump ban may do more harm than good when it comes to the Biden presidency.