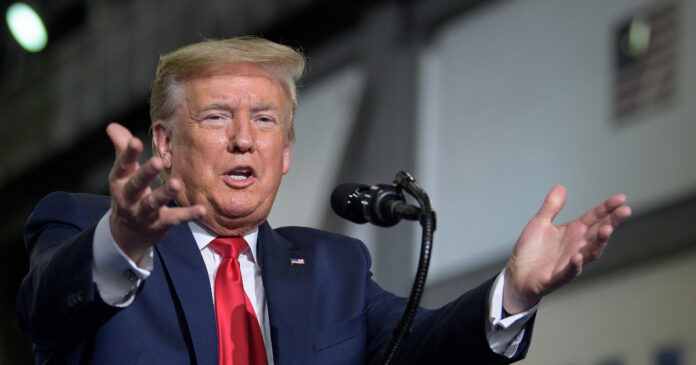 President Donald Trump has found an unlikely ally in The American Civil Liberties Union who has spoken out against the censorship of the president on various digitally-based platforms.

However, the president found himself the subject of ACLU senior legislative counsel Kate Ruane when said in a statement reported by The New York Times that Trump’s banishment to uncommunication is an illustration of how much power Big Tech has, and how sobering that should be, even for Trump’s harshest critics:

Here’s the full ACLU statement on the Twitter/Facebook ban of Trump: pic.twitter.com/1IkWujbugT

“We understand the desire to permanently suspend him now, but it should concern everyone when companies like Facebook and Twitter wield the unchecked power to remove people from platforms that have become indispensable for the speech of billions – especially when political realities make those decisions easier,” the statement from the ACLU representative said according to the Times.

“President Trump can turn to his press team or Fox News to communicate with the public, but others – like many Black, Brown, and LGTBQ activists who have been censored by social media companies – will not have that luxury. It is our hope that these companies will apply their rules transparently to everyone,” the statement said.

Even more traditional sources offered their apprehension over the banishment.

Washington University in St. Louis law professor Gregory P. Magarian said that while he doesn’t agree that private businesses have the same standard of First Amendment rights as governmental arenas, he’s concerned about Twitter’s ability to send someone into a state where they’re unable to communicate in the same manner as the rest of the world.

“The First Amendment doesn’t require any private forum to publish anyone’s speech,” he said. “Neither Twitter nor Simon & Schuster has any obligations under the First Amendment.” He added: “Any suggestion that people like Trump and Hawley, and the viewpoints they espouse, will ever lack meaningful access to public attention is ludicrous. We should worry about private power over speech, but presidents and senators are the last speakers we need to worry about.”

“I want a wide range of ideas, even those I loathe, to be heard, and I think Twitter, especially, holds a concerning degree of power over public discourse,” he said, according to The New York Times.

Ironically, the president’s case to be allowed back on social media might be saved by a previous attack by the left. Trump was previously banned from blocking those who caused him problems on Twitter when it was ruled in 2019 by the United States Court of Appeals for the Second Circuit that as a government official who used the account to conduct government business, he was not allowed to exclude anyone based on their viewpoint.

Thanks to that ruling, the courts were already brought into the business of Trump’s Twitter, and it’s believed that the Supreme Court may get involved in the most recent case as soon as Monday to decide distinctions raised by the recent developments.

“This isn’t just about President Trump, but this is literally about the 75 million Americans” who voted for him, CNN reported that a Trump “adviser,” said.

I have suspended my own Twitter account in protest against Twitter’s fascism. I ask all my followers to join me now on Parler and Rumble.https://t.co/XswC88juiGhttps://t.co/1YeTi0ywBk

It is now time for Congress to repeal Section 230 and put Big Tech on the same legal footing as every other company in America. Legal accountability.

“Big Tech and Capitol Hill Democrats seem to have the magic ability to galvanize the Republican base in a way that only they know how to do,” the adviser said. However, according to Brad Parscale, a former Trump campaign manager, Silicon Valley might be quaking in their high-topped boots yet. The former Trump staffer said that the president might consider creating his own platform when he leaves office, according to The Washington Post.

“I believe the best avenue for POTUS is to use his own app to speak to his followers,” Parscale said, according to the Post.