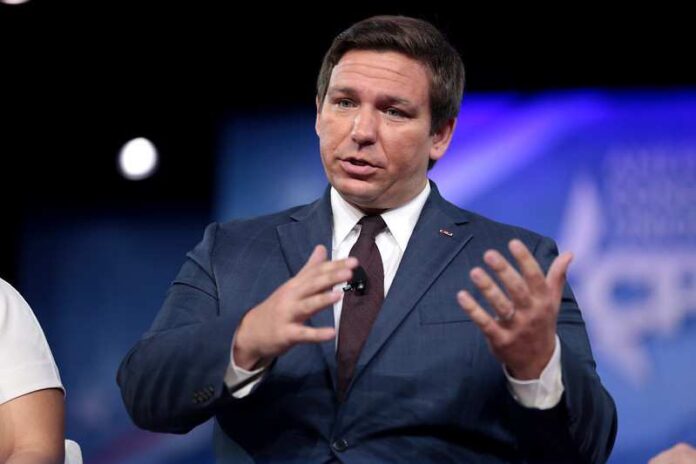 There is nothing like watching a Democrat get dismantled one piece at a time by an informed Republican with an unbeatable record. Ron DeSantis is up for reelection next year, and the piranhas are already forming. Nikki Fried is the Florida Agriculture Commissioner, and she thought that she has enough popularity to unseat the mighty governor in the upcoming election. But there are so many problems with her that no one expects it to be a close race.

DeSantis was holding a press conference, and he was asked by one person, “With Nikki Fried now getting into the race to oppose you, do you expect a kind of escalation in the cultural wars?” There is not a person in Florida that wants a liberal sitting at the helm. Everyone knows that they will kill off everything good about the Sunshine state.

The governor was quick to respond, “Here’s what I’d say, you know, Nikki Fried has done nothing in office, she does nothing. All she does is a emote on social media, virtue signal to small-dollar donors in California and New York.”

Fried sits in her office playing around on social media, acting like she is doing her job. DeSantis mentioned that she likes to post pictures of herself all the state. He mentioned that “She put her face, spent millions of dollars, to put her face on every gas pump across this state purely to boost her own image at your expense as a taxpayer. She’s a lockdown lobbyist. She would have had our kids locked out of school the whole year. She would have had this business shuttered for the whole year. They would be out of business, if Fried were governor.”

The arrogance that Fried is portraying is a typical liberal fantasy land. Every time the governor makes a move, she wants to go the other way. DeSantis pointed out that “So she’s opposed us at every turn. All the good stuff we’ve been able to accomplish for Florida, she opposes it. And I’ve done more I think in my first week as governor than she has done in her entire time in government.”

.@NikkiFried is a #lockdownlobbyist who has opposed every commonsense measure that has kept Florida safe and free like open schools, businesses, and places of worship. @GovRonDeSantis has done more in one week than Fried in her time as Ag Commisioner. pic.twitter.com/yw3pQp6YL0

The Democrats all play out of the same book of secrets. They strive to appear busy to justify to the voter that they deserve to stay in office.

Fired is no different. She decided to amend two forms dealing with finances so she could announce that she was going to run against Ron DeSantis. The forms the changed ended up showing that the liberal made hundreds of thousands of dollars in money that she did not want to tell where it came from.

One report showed that she changed “, a last-minute amendment to her 2018 financial disclosure forms first reported by blog Tallahassee Reports, shows that Fried, 43, On changed the amount of annual income she made from her consulting firm Igniting Florida from $72,000 to $351,480 on Friday, May 28, days before she announced that she will seek the Democratic nomination to run for governor against incumbent Ron DeSantis. The form was first amended in January 2020 to reflect the $72,000 income for the first time.”

Now that she wants to play with the big boys, she has to be honest with her dealings. She has to fix all her dealings so no one can find her lies and use them against her next year.

The Democrats love to get rich off taxpayer money. Fried went from having a $270,000 net worth to almost $1.5 million in a few short years. And she is not telling how she made her money. Many believe that she got her money from marijuana sales that her boyfriend has been funneling to her. Instead of earning money herself, she has to accept it off the work of other people.