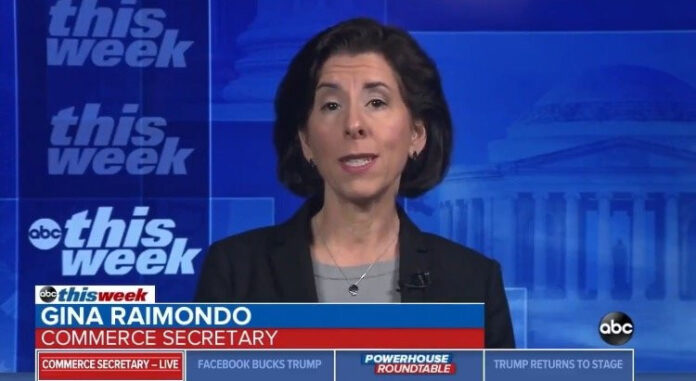 Joe Biden offered up a very chilling message to criminals all around the world. He is telling them exactly what they want to hear. The United States cannot put a stop to cyberattacks on our infrastructure, so go ahead and have at it! What a weak and ineffectual leader.

Joe Biden’s Commerce Secretary Gina Raimondo spoke with ABC’s “This Week” over the weekend. We thought that she would be trying to quell the fears that many Americans have. Instead, she only increased everyone’s level of paranoia by letting the world know that the attacks would not be stopped anytime soon.

They are going to become a regular fixture in our lives now. Another ransomware attack took place last week, as the largest ferry service to Martha’s Vineyard and Nantucket was targeted. The Metropolitan Transportation Authority’s computer systems were also attacked in April by hackers who have connections to the Chinese government.

Our food supplies and our gas supplies have been targeted, which has us wondering how much worse things are going to get. So what reassurances did Raimondo have to offer? In a word: none. The message from the Biden administration is not a hard one to understand.

They are telling the private sector that this is their issue to deal with. “In wake of numerous cyberattacks, @GStephanopoulos presses Commerce Sec. Gina Raimondo on whether the government should do more to force businesses to protect themselves and their customers: “It is clear that the private sector needs to be more vigilant,” tweeted the This Week Twitter account.

Isn’t that nice for them to hear? “Sorry that ransomware attacks are now a new part of your day to day, after you’ve spent over a year dealing with a global pandemic. Enjoy!” seems to be the general response from the Biden camp. How could they be so callous about an issue this big? They are really going to leave the rest of the country to fend for itself, as the Chinese and the Russians start to lick their chops.

We hate to belabor this point but this is not something that Trump would have ever allowed. He would not have taken to the airwaves to tell people that they were on their own. The rule of law matters to him more than it ever will to Joe Biden or any of his cronies. He also knows that it is important to project an aura of strength when it comes to the Chinese and the Russians.

In wake of numerous cyberattacks, @GStephanopoulos presses Commerce Sec. Gina Raimondo on whether the government should do more to force businesses to protect themselves and their customers: “It is clear that the private sector needs to be more vigilant.” https://t.co/B2TXQ21opD pic.twitter.com/trsAa8bziR

Trump would never sit down and allow any of this to happen. We are already laughing, thinking of the hypothetical tweets that he would have fired off. Soon, order may be restored. Behind the scenes, Trump is letting people know that he expects to be reinstated sooner rather than later. We do not want to get our hopes up just yet but it seems like the wheels of justice are finally starting to turn, which should be terrifying to someone in Joe Biden’s shoes.

Can you imagine the embarrassment of being marched out of the White House less than a year into your presidency? This is what Biden is staring at right now. At this point, we would not be shocked if there were some lefties who were ready to give him the boot. All of those freebies that he promised them have yet to materialize. He’s not going to cancel student loan debt and Medicare 4 All is still a non-starter.

At this stage of the numerous crises that Biden has created, maybe he would be grateful for the break. He probably misses his nice, warm bed in Delaware. This is not something that he will ever be willing to admit but in his heart of hearts, he knows that it is true. Now, Americans are going to have to wait, wish and hope that they are not affected by cyberattacks of this nature going forward.