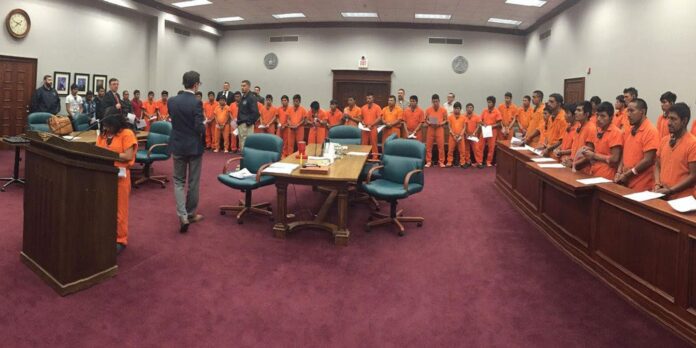 As you well know, the situation at our nation’s southern border is in full crisis mode. So much so, in fact, that the border state of Texas has recently declared a state of disaster for 34 of its 254 counties, all of which are located along the increasingly populated border with Mexico.

According to Republican Governor Greg Abbott’s Monday statement on the issue, “the ongoing surge of individuals unlawfully crossing the Texas-Mexico border poses an ongoing and imminent threat of widespread and severe damage, injury, and loss of life and property.”

But Abbott realizes that simply calling the state of affairs in his state, or at least the southernmost parts of it, a disaster, does little to remedy the situation. And so he’s making a promise to make some significant changes.

As the GOP governor told Fox News in a recent interview posted to Sean Hannity’s website this past Thursday, Abbott and other Texas lawmakers will stop at nothing to defend their state. And that starts with ramping up arrests, as Biden seems to care less and less about doing so.

“We’re about to change the way that Texas addresses the challenges along the border. And we’re going to start by helping these 34 counties respond by increasing arrests. We got a new game in town in the state of Texas that’s going to begin next week.”

And that game is to enforce trespassing laws.

According to Abbott, arrests will be made of “everybody coming across the border. Not just arresting them, but because this is now going to aggravated trespass, they’re going to be spending half a year in jail if not a year in jail, as well as other actions that I will be announcing next week.”

You see, when illegal migrants come across the border, they are typically arrested or detained by a federal agency such as Customs and Border Protection or CBP if caught. They are then held in a border facility until they can be processed, including running a background check, making sure they are who they say they are, etc.

After that, thanks to Biden’s recent re-implementation of a “catch-and-release” policy, they are then released into the interior of the United States until their immigration court date, which can be a full two to three years later.

Essentially, there is no punishment for their crime of breaking our federal, state, and immigration laws.

Texas says that plan is obviously not working and now is causing severe damage to his state and constituents. So they will take matters into their own hands, arresting “everybody” who crosses the border on charges of trespassing, which can legally be punished by a good amount of time behind bars.

The hope is that this increase in potential punishment will dissuade a good number of migrants to not go the illegal route.

As Abbott noted in an interview with Newsmax, he’s going to “step up” where Biden hasn’t to “secure the border.”

He said, “You hear about disaster declarations for hurricanes. This is the first time that I’m aware of where I had to declare a disaster for 34 counties along the border because of the crisis because of so many people coming across the border.”

He continued, explaining that since Biden took over the border, cartels have increased their US presence exponentially – and Texans are paying the price. “(R)anchers’ property and their fences are torn down, their livestock is let out, their homes are damaged, their cars are broken into, their neighborhood are dangerous.” And he can’t abide by it any longer.

Abbott has already deployed more than a thousand public safety officers and National Guardsmen to help out in those counties as part of Operation Lone Star. But they have barely made a dent in the massive numbers of those crossing over and the increasing damage they are causing.

And so, the state is preparing to take new and unprecedented action. After all, if the federal government isn’t going to reach out and help states like Texas, who are obviously in dire need of it, those states have every right to stand up and fight for themselves.