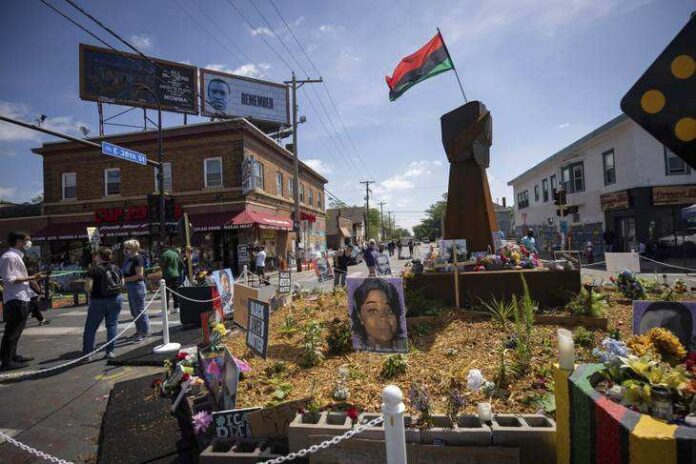 George Floyd’s death shook the city of Minneapolis. It shook the entire country. Now, the anniversary of his death has come and gone. It’s time to clean things up and get back to law and order.

For a full year, a memorial has been set up in the middle of the city. Protesters have called it “George Floyd Square.” While it was an honorable display of Floyd, the City has decided that it’s time to get it cleaned up.

Black Lives Matter is furious. How dare the city clean up such a memorial.

The problem is that it’s not just a few signs and bouquets of flowers. The “square” has also been met with barricades. Protesters and rioters have camped there for months. They’ve made it so that police can’t get into the area. Traffic has been diverted.

Enough is enough. The rioters and protesters have had a chance to mourn. The country as a whole has promised to work on police reform.

City workers started at dawn a few days ago to begin clearing the barricades away. It will allow traffic through the area once more.

Various aspects of the memorial will be preserved.

Within an hour of the city showing up, people took to Twitter. Many were using the #JusticeforGeorgeFloyd hashtag as they felt that there was still no justice because the city was cleaning up the mess.

The sculpture of a fist that stands several feet tall will remain in the roundabout. However, the garden around it has to be moved because it’s been impeding traffic. The intersection has been blocked for months – and it’s been a problem for city buses and other traffic.

Justice has been served, has it not? The death of George Floyd has launched an entire movement of awareness. Congress has heard the cries to reform the police. Riots have broken out in virtually every major city to ensure that everyone heard that black lives matter.

We hear you. We understand you. However, the city must be able to operate normally. An entire year was dedicated to the square. Minneapolis allowed the blockades to stay a lot longer than many other cities would have allowed. And, they have promised to preserve many of the artifacts.

Many members of Black Lives Matter have called the city’s actions “disrespectful.”

Why is it disrespectful? It has been in place for a year. Meanwhile, BLM rioters have looted innocent businesses and injured innocent individuals. Are these actions respectful? Absolutely not. There has to be a give and take.

The city cannot allow traffic to be blocked for an indefinite amount of time.

City spokesperson Sarah McKenzie explained on Fox News that “this is a community-led reconnection process with City support.” The city worked in coordinating the efforts with the Agape Movement.

According to Agape Senior Advisor, Steve Floyd, “there’s a chance and a time for this community to get back to a new normal. That’s what we’re trying to establish.”

What a shocker. The entire community is looking to get back to a new normal. The only ones finding what the city is doing wrong is BLM. They would rather maintain a state of chaos, which should tell you everything you need to know about the organization. They want to call the shots. They want to rule the city.

A unified message was also sent out regarding the opening of George Floyd Square, also known as 38th and Chicago. The mayor and the city council VP have said that there are three guiding principles regarding the reconnection of this area with the city. It’s to focus on economic stability, racial healing, and community safety.

The city is not the enemy. They have stated that they are “collectively committed” to creating a permanent memorial at the intersection so that artwork is preserved and so that there is a space for racial healing.

If BLM cannot support this, they are not truly the organization of racial healing that they claim to be.