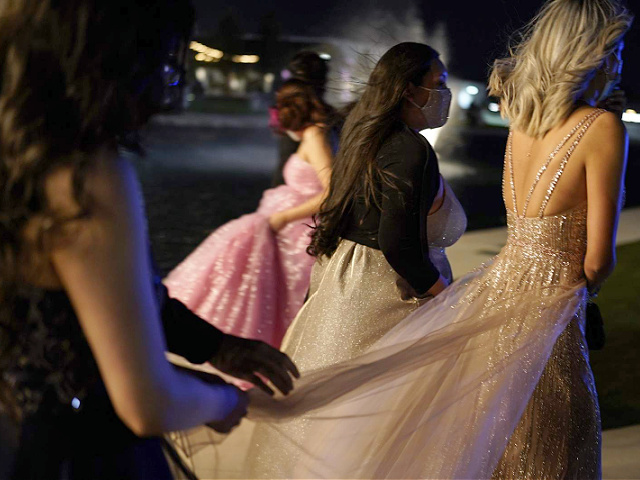 Ann Marie Banfield, who writes at the blog Granite Grok, reported New Hampshire Rep. Melissa Litchfield, who represents the Brentwood district, posted to Facebook Tuesday that some constituents informed her their unvaccinated students who attended the Exeter High School prom Monday night “had a number written on them in Sharpie” and were tracked throughout the evening.

Litchfield continued with some quotes from “angry” constituents:

If they were on the dance floor they had to raise their hands after every three songs so their numbers could be recorded by other underclass students for contact tracing purposes. There’s even more to the story, but this alone is surprising to us. We truly feel they are literally branding our kids if they don’t get this experiential (sic) “emergency” approved vaccine …

They also left the list of student names (first and last) with the info on whether they were vaccinated or not on a table outside after the prom. I found it the next morning. This information should 1. Not have been shared and 2. Should never be left where anyone can have access to it. I have a photo of the list.

“I find it absolutely unbelievable that ‘ ‘ and ‘ ‘ was allowed to treat the kids like prisoners in Nazi Germany,” another person told Litchfield. “Marking them, thus singling them out, and then having to raise their hands is beyond tolerable.”

“First the school could be looking at lawsuits for violation of Hippa [HIPPA] rights,” the constituent continued. “They have no business asking for a vaccine card … last Thursday masks were no longer required outside and if this is in effect it should not have mattered if they were vaccinated or not.”

“If anyone has any further information, I would very much appreciate it,” Litchfield posted. “There has been much talk at the State level regarding vaccination status and confidentiality.”

Banfield reported she was contacted on social media by a parent whose child attended the prom. The parent said her child (name kept confidential) “was at this event and was ‘numbered’ with a sharpie because (child) was not vaccinated.”

The parent reported her child attended the prom with a friend who had received the vaccine and who “was not numbered.”

It was not communicated to us beforehand. The kids were told it was optional to provide a copy of their vaccine card. When they showed up at prom check-in they were marked and had a number written on them in black sharpie on if they were not vaccinated (sic). Those that were vaccinated had a different color mark and no number assigned to them. Underclassmen were given the role of writing the numbers down on the dance floor. After every 3-4 dances kids were asked to raise their hands so the underclassmen could record the numbers.

The parent told Banfield vaccinated students were required to show their vaccine cards to the class adviser at check-in. Those students without a vaccine card were “numbered.”

According to Banfield, the parent reported “a list, with numbers associated to names,” that was intended to be used for contact tracing of students who were not vaccinated.

The parent said that if a student tested positive for COVID in the week ahead of the prom, all the “numbered kids will miss graduation and all their senior week activities per the school’s contact tracing policy.”

“It is not right that kids are feeling pressured from peers, school and government to get vaccinated,” the parent posted. “Kids should not feel they need to get the vaccination or they will potentially ‘miss out’ on events. It is a personal choice and should remain that.”

“It has become a way to separate and cull out those that won’t follow along – it’s a scary, slippery slope and I guess I hope that if attention is brought to it, people might think twice about whether we want to start down that slope or not,” the parent added.

Banfield wrote about the issue of medical confidentiality.

“It is the parents who send the school district vaccine information on their children,” she observed. “They are the ones who determine whether they want to share this information or not. These are medical records on students, and yet it appears as if that information was on display for everyone to see.”

“What if students were branded with a number if they have a Sexually Transmitted Disease?” Banfield asked. “Should they be required to share that information too? What about AIDS? Where’s the ACLU?”