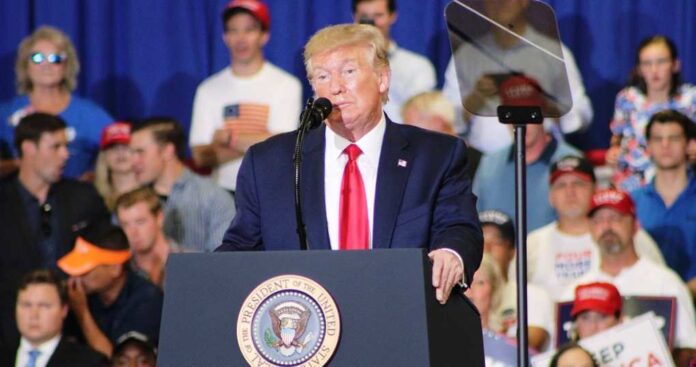 Former President Donald Trump has long held to the idea that reparations are undeserved and unneeded here in the United States. Or at least, that’s what we thought.

But as of this past weekend, Trump announced that America now needs them.

Well, because he’s not talking about reparations as you’ve likely thought of them in the past.

When you hear the word reparations, you, no doubt, think of the political left’s belief that some form of payment should be made to living relatives of black Americans who endured slavery in the United States.  To be clear, Trump is still very much against this.

Instead, he told America this past weekend that “reparations” should be paid to America, and the world as a whole by China, as they have now been officially named as the reason COVID-19 and its subsequent pandemic spread.

Now, this is far from the first time Trump has suggested such. You might remember when the virus first hit our shores, then-President Trump almost immediately began to blame China and its communist party for the disease’s spread.

He even went so far as to refer to COVID-19 on multiple occasions as the “China virus.” Additionally, he told Americans that if he were given another four years in the White House, he would work to make China pay for the troubles they had allowed to ravage the world.

Of course, with hopes of ousting their arch-enemy Trump from office during the election year, the political left used Trump’s words against him, lambasting him as a racist and white supremacist.

But now, with Trump out of office and evidence mounting by the day of China’s crimes, the left is being forced to admit that our former president was right. It is China’s fault, and Dr. Anthony Fauci and his friends were wrong.

Trump said this as well in his Saturday night speech at the North Carolina Republican state convention. In fact, that’s how his discussion on reparations began – with saying that Fauci had “never been more wrong.”

According to a Rev.com transcript of Trump’s speech, he said, “Fauci has, perhaps, never been more wrong than when he denied the virus and where it came from. The time has come for America and the world to demand reparations and accountability from the Communist Party of China. We should all declare with one unified voice that China must pay. They must pay.”

Last week, after emails from Dr. Fauci, were released proving that he had known about the truth of COVID-19 origins and had denied it, Trump sent out emails of his own to supporters suggesting that China must be held responsible and that they must pay.

He wrote, “Now everyone, even the so-called ‘enemy,’ are beginning to say that President Trump was right about the China Virus coming from the Wuhan Lab. The correspondence between Dr. Fauci and China speaks too loudly for anyone to ignore. China should pay Ten Trillion Dollars to America, and the World, for the death and destruction they have caused!”

In his speech from the weekend, Trump suggested that this sum be paid to America and other nations using tariffs. He said, “The United States should immediately take steps to phase in a firm 100 percent tariff on all goods made in China.”

Of course, as Trump is no longer the president nor a seat holder in any public office, he doesn’t really have any authority to make this happen. Instead, all he can do is suggest, hoping that current leaders will consider his advice at the very least.

But, of course, it seems unlikely that Democratic President Joe Biden will be making any moves in that direction.

As of now, all he’s done on the matter of coronavirus origins is to ask “the intelligence community to redouble their efforts to collect and analyze information that could bring us closer to a definitive conclusion and report back to me in 90 days.”

When those 90 days are up, who knows what, if anything, Biden will do with such information.

And if that isn’t unsatisfying enough for you, Biden’s White House deputy press secretary Karine Jean-Pierre recently made it known that in order to gain such information on the origins of COVID-19, the White House would be working with none other than the WHO, you know, the very same organization that helped Fauci and others hide the origins in the first place.

Suffice it say, Biden’s more likely to give China a prize at this point than any consequences…