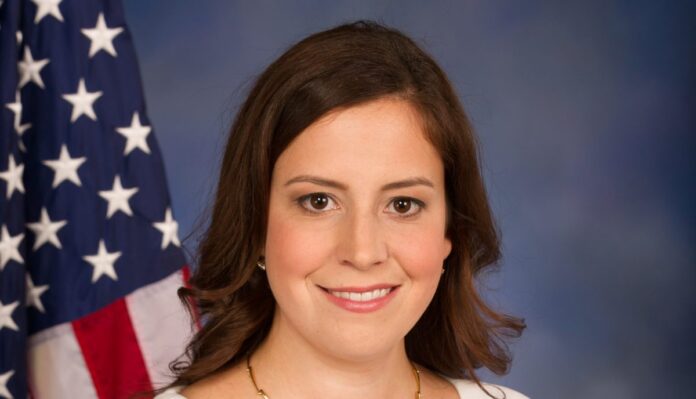 Republican Congresswoman Elise Stefanik has been serving the people of upstate New York for some time now. Her district represents the North Country, much of the Adirondacks, and sections of Utica. Cancel culture has been coming for all of the Republicans as of late. Stefanik is just the latest casualty.

The liberals have come for her because of her willingness to stand up for what she believes in. The attack comes from the good people of Harvard, of course. Stefanik graduated from the school 14 years ago. From there, she has remained closely involved with the goings-on at Harvard. She has played a key role on the Harvard Kennedy School’s Senior Advisory Committee.

Stefanik has also spent a sizable amount of time mentoring students at the venerable institution. Now, she will no longer be serving the school in either of these capacities. Her connection with Donald Trump has caused her to fall out of favor. Cortney O’Brien at Town Hall has more background on this developing story.

“Rep. Elise Stefanik (R-NY) says she is proud to join a growing list of conservatives who have been banned or shunned by college campuses. On Tuesday, the Harvard Kennedy School informed the conservative lawmaker that they have decided to boot her from the school’s Senior Advisory Committee for what they referred to as her baseless claims of voter fraud during the 2020 presidential election. Stefanik was in Harvard College’s class of 2006 and has been mentoring students ever since,” O’Brien reports.

This isn’t all that surprising to anyone who has been watching everything unfold after the past few days. Stefanik is not the only one who is going to find themselves ‘canceled’ over the next few weeks, either. If institutions like Harvard are severing ties with anyone who stood with Trump, what chance does anyone else have?

“In a message to the Senior Advisory Committee of the Institute of Politics at Harvard Kennedy School, Dean Doug Elmendorf explained his decision to kick Stefanik off the panel. He added that he was still “grateful for her long and committed service.”

Following this consideration, I spoke with Elise and asked her to step aside from the Senior Advisory Committee. My request was not about political parties, political ideology, or her choice of candidate for president. Rather, in my assessment, Elise has made public assertions about voter fraud in November’s presidential election that have no basis in evidence, and she has made public statements about court actions related to the election that are incorrect. Moreover, these assertions and statements do not reflect policy disagreements but bear on the foundations of the electoral process through which this country’s leaders are chosen,” O’Brien concluded.

Stefanik was asked to step down by the dean but she was not willing to do so. When the decision was made to remove her forcibly, he even tried to claim that it has nothing to do with any sort of political leanings. Anyone who believes this one is more than welcome to purchase some of our oceanfront property in Nebraska.

Those who weren’t ready to throw Trump off a bridge and pledge their undying loyalty to the incoming administration were always going to be targeted. The youngest woman ever elected to the House of Representatives (at the time) is now being told to hit the bricks by Harvard, all in the name of remaining woke. Her star may have been on the rise in the GOP but that did not matter to Harvard.

While they were able to grudgingly accept her political affiliations before, the time has come for her to pay the piper. Harvard was more than happy to yank this thorn out of their side as quickly as possible. This is their loss and when they inevitably come to their senses later on? Stefanik needs to tell them that it is time for them to take a long walk off a short pier.