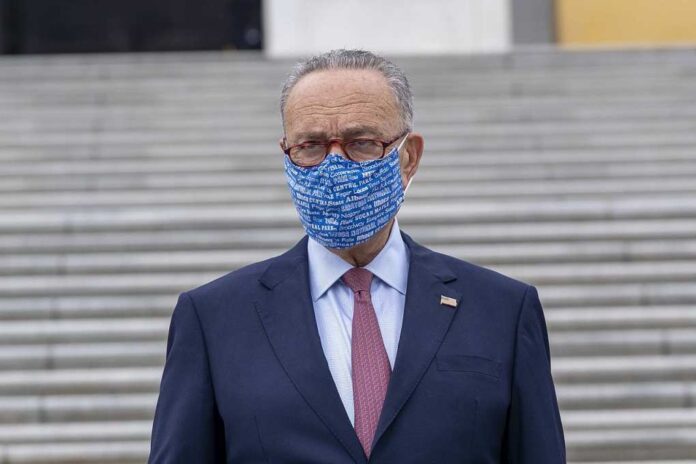 Congresswoman Alexandria Ocasio-Cortez (D-NY) has not made any secret of her controversial stands on a plethora of issues. She and her “squad” have become so progressive that even House Speaker Nancy Pelosi has had to, at times, separate herself from the group in an effort not to be taken down by their far-leftist ideology.

The new and possibly damaging move that has AOC in the dog house, however, has social media calling Democrat Senate Majority Leader Charles Schumer (D-NY) for holding his piece while Ocasio-Cortez claimed that the cure to violent crime was to stop the progress on building new prisons in the United States (yes, you read that right, she wants fewer prisons to decrease crime):

“If we want to reduce violent crime, if we want to reduce the number of people in our jails, the answer is to stop building more of them,” Ocasio-Cortez said at a press conference according to The Daily Wire. “The answer is to make sure that we actually build more hospitals, we pay organizers, we get people mental health care and overall health care, employment, etc. It’s to support communities, not throw them away.”

That call to “forgive and forget” as it were, by the New York Democrat had voters questioning whether the two New Yorkers were in cahoots on the outrageous plan, especially considering that AOC’s comments came on the heels of the New York Police Department’s announcement last month that crime statistics in the nation’s largest city were sharply increasing.

The facts don’t seem to be slowing AOC down, however, as she doubled down on her anti-corrections propaganda with the most iconic of liberal bleeding heart mantras:

“Right here in the Bronx, our community developed a successful approach to reducing violence. It starts at the hospital after an incident. We bring in psych Drs & folks who turned their *own* lives around to work w/ youth. It’s reduced reoccurrence of violence by more than 50%,” AOC later claimed in a tweet.

“It’s called Stand Up to Violence (SUV), a cutting edge program run out of @JacobiHosp (a PUBLIC hospital!), and it is hands down one of the most effective treatments we’ve seen to reduce incidents of violence like shootings and stabbings. I’m asking for fed resources to grow it.”

The congresswoman’s loud and proud stance against taking measures to rehabilitate lawbreakers caused quite a stir among political commentators, particularly those who blamed the veteran politician that Schumer is, for not reigning in the new crop of progressives:

“This is actually really wrong, many prisoners are overcrowded and antiquated, simply blocking the construction of new ones is inhumane,” progressive writer Zaid Jilani wrote. “And you can talk all you want about just having fewer prisoners but you aren’t going to get any significant drop overnight, everyone knows that.”

National Review Senior Writer David Harsanyi mocked the congresswoman saying that he was going to get rid of his scale saying “It’s the only real way to lose weight.”

One less notable social media user railed against the congresswoman saying, “She always brings up valid problems with literally the dumbest solutions imaginable,” another social media user wrote. “She never specifies how we will accomplish those goals, she just says that we need them and walks away. Implementing a support program via mental health is going to take a complete rewrite of the criminal justice system, and what about for-profit prisons?”

Does American have a problem with violent crime? Yes, it sure does. However, any person who has spent even a day with a toddler knows that human nature dictates that removing the negative effects of a wrong action leads to more of the bad action, not less of it. AOC is once again simultaneously tanking her own credibility and dragging the Democrat party down with her. So maybe that’s both the great tragedy and the small gain.