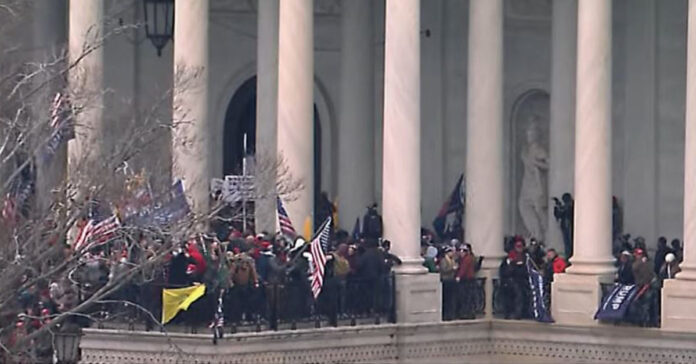 A Florida substitute teacher has found herself fired from her position after teaching the kids in her class something that contradicted the official narrative about the Jan. 6 Capitol Hill protest that turned violent.

According to a report in TMZ, the teacher, whose name was not divulged, was fired after saying that the violence on Capitol Hill was started by Antifa members who posed as Trump supporters during the rally that was estimated to be two million strong.

An Instagram account called @KnowYourRacists shared a video taken by a student where the teacher can be told parroting the same accounts given by many of the eyewitnesses,  to the event, and reported by The New York Post, that it wasn’t the supporters of President Donald Trump that broke any windows or incited violence.

“Teaching kids that Antifa broke into the Capitol

” the video’s caption read. “School name: Bok Academy in Lake Wales, Florida. She was a substitute teacher in the middle school’s language arts class. She has been dismissed from the Lake Wales Charter School System

Hatefulness spewed from the comments about what this teacher could possibly be thinking, going against what has been chosen as the consensus, by people who were primarily, not present at the event.

“Needs to be fired,” said one commenter. They went on to say “let’s go to the principal’s office I’ll take a detention for 100 Alex!”

Another long-form comment was from someone who’s take on government-controlled narratives was pointed at conservatives, but would likely be much more fitting when seen through the lens of the mainstream media’s agreement on how stories should be framed:

“OMG. She shouldn’t be teaching. I grew up in the thick of Apartheid in South Africa as a white boy. We were very very sheltered from the truth of what was really happening it was the seventies and we didn’t even have television(sic).

“All newspapers were state owned and completely biased. I will never forget some of the stories that were told when we grew up by family and white society, to deny reality and justify the ideology and effect of the regime. When South Africa received appalling coverage in newspapers abroad, people would say that foreign reporters had thrown sweets into garbage bins, and when children tried to get them out these journalists would then take photos and tell the world that African children were starving ….

“Similarly any photographs of the victims of police shootings seen lying in a street, and published abroad were said to be black actors, paid to pretend that they had been shot. Sound familiar. Sounds just like the nauseating “false flag” denials of everything from Sandy Hook to this woman in the video, in full force denialist mode. It never changes, and all of these are classic examples of how white power tries to deny it’s own existence and it’s real nature, how it creates fables and lies to deflect from it’s own culpability and the atrocities committed in its name.”

According to TMZ, principal at Bok Academy in Lake Wales, FL, Dr. Damien Moses told the publication that the conduct was immediately dealt with:

“We met with her and she has been dismissed not only from our school but also from the Lake Wales Charter School System.”

Sadly for the students who are learning in the Lake Wales Charter School System, a teacher promoting a position that was backed up by not only eyewitnesses but technology applied to the specific group just isn’t enough.

Only one story will reach their young ears, and it will be what the leadership approves (in this case, the same thing Big Tech and the mainstream media have promoted). Supporting other viewpoints or having your own opinion won’t be tolerated. Learn to think what they say, or you’ll really see what a loss of freedom looks like.