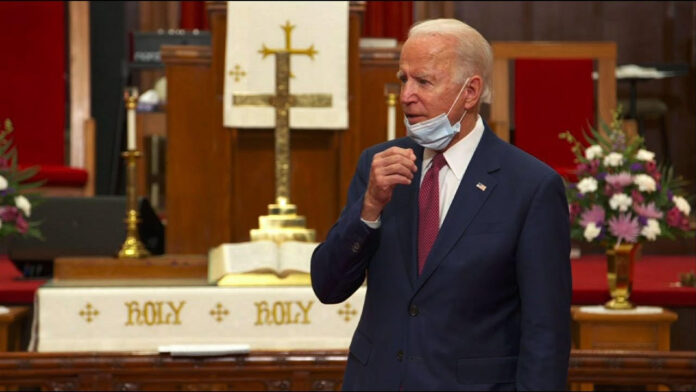 Isn’t it about time that Joe Biden stop claiming that he’s Catholic? He should be excommunicated once and for all.

Biden used his religion as a way to get voters during the presidential election. He had to prove to Americans that he wasn’t the ultra-liberal candidate that many were painting him out to be. He had to prove that he holds Christianity near and dear to his heart.

It’s getting old. No one believes him anymore.

Many priests and bishops have come forward in the past year to shun Biden and explain why he won’t be receiving communion. After all, supporting abortion goes against the teachings of the Catholic church. And Biden has been a loud supporter of pro-choice movements.

The Catholic League has been watching President Biden. And they’re ashamed of all that they’ve seen the self-proclaimed catholic has said and done.

In less than five months since Biden has taken office, he’s taken a stand against core Catholic teachings. Not once, not twice, but 32 times according to a report that the Catholic League has established.

Bill Donahue, the League president, has sent a report to all U.S. Bishops. The report shows the ways that Biden has departed from the Church’s teachings. The league has been tracking policy decisions that the president has made – and it’s been beyond disappointing.

Now, the president has a lot of critical decisions that must be made. In some instances, he must use prudential judgment. That’s not the issue, though

What Donahue is objecting to is that there are non-negotiable principles of Catholic belief that Biden has simply bulldozed over.

Several of the decisions that Biden made were handled within days of taking office. Through the use of executive order, he allowed minors of high school sports facilities to use facilities of the opposite sex. Essentially, Biden bulldozed over the difference between men and women.

As if those things weren’t bad enough, Biden also ordered the administration to resume funding the United Nations Population Fund, which blatantly promotes family planning through the use of abortions.

Unfortunately, it doesn’t stop there.

In February, Biden issued a memorandum that advanced the rights of the LGBTQ+ community. The problem with that is that it will also limit the ability of faith-based organizations to assist in areas of foreign aid.

In March, Biden also threw his support behind the “For the People Act” which is commonly known as H.R.1. It makes the assumption that people of faith (not atheists) are inclined to be partisan observers. Donohue explains that this is dangerously close to invoking “a religious test.”

Oh, and in April, the FDA decided that they were no longer going to enforce the “in-person dispensing requirement” for the morning-after pill, a chemical abortion pill.

With so many blatant disregard to the teachings of the Catholic church, it’s clear that Biden is looking to remote religious liberties from the U.S. Anti-religious organizations have even insisted that pro-religious liberty policies promote a concept known as “Christian nationalism.”

We’ve forgotten that the entire history of our country is rooted in Christianity.

Yet, Biden still tells everyone that he’s “a devout catholic.”

It’s clear that Biden isn’t as catholic as he claimed to be. At this point, we can’t believe anything out of his mouth. Now, we just have to hope that he can keep the country in one piece until we can get him out of office in 2024 (if not sooner).