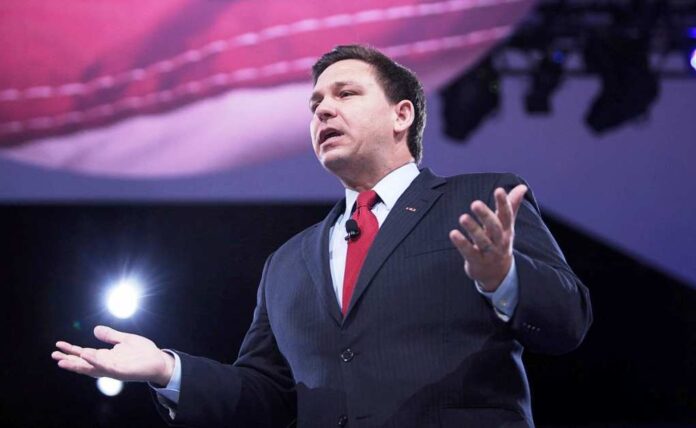 The media is in an all-out panic each time that the governor of Florida takes to the stage. He has a way of putting the truth out there for the people to know. And He certainly is not going to let the mass media twist his words into lies that they can use in their favor.

Ron DeSantis knows how to talk to crowds. He knows what to say and exactly how to say it. He leaves no room for ambiguous interpretation or for questions to arise. He tells the truth precisely the way it needs to be said. He understands that the people have a right to know the truth and be protected from the insanity of liberal liars.

After signing a couple of bills that put China last and Americans first, the speech he gave was right up his ally of being the great leader he is developing into. There is no question that he is presidential material.

He can sign bills and give powerful speeches all at the same time. And this time, he spoke directly at the progressive, loving communists that want to act like toddlers when it came time for the federal politicians to vote on bills that limited money coming from China.

DeSantis stated that “And then I don’t even need to discuss, you know, these entertainers and the athletes and these business people. If you’re somebody that will light your hair on fire because Georgia is requiring voter ID but yet you’re lining your pocket with money from China and not a peep about the slave labor that’s going on over there, you, my friend are a hypocrite, and you’re not somebody that should be taken seriously.”

The greedy liberals see no problem taking money from a corrupt government that persecutes and murders their people. But they have issues when America takes steps to secure itself and stop the reds from getting a foothold in the country. The liberals love the money, so they will throw their fit when someone comes along and wants to take it all away.

He went on to blast them righteously by stating, “And yet, that seems to be the normal course of things. And I think a lot of these companies, you know, who’ve tried to become woke and try to basically get in with some of these far-left activists when it comes to things like voter ID, they have a really hard time explaining how if that’s the line in the sand for them, how they could possibly have these business relationships that they do in China and specifically with the Chinese Communist Party because you don’t get to have big business relationships there unless you have the imprimatur of the CCP.”

Joe Biden is in the same boat with the Nazi liberals because he has taken money from the communists. He is the president to be owned by a foreign power. And it certainly clarifies why Biden is so sympathetic and easy on China since they are the holders of all his cash.

Biden did not split hairs as he gave credit where credit was deserved. He finished up by stating that “So I think what the legislature did was great. It was long overdue, but particularly, I don’t see how anyone could have lived through the last year and a half and not come to the conclusion that there’s something fundamentally wrong about how this regime is influencing so many different institutions and industries around the world.”

How any person could ever hold hands with a killer government that unleashed the horrors of COVID-19 on the world and them tried to cover up their crimes by killing people and erasing data is beyond all moral codes of ethical thinking.

The progressive socialists are guilty of turning their backs on Americans as they have embraced the horrors of the communist giant. Their lust for money hurts America and drags the country down. Every time they take money from a murderous nation is just another way to remove the greatness from America and destroy it for everyone else.