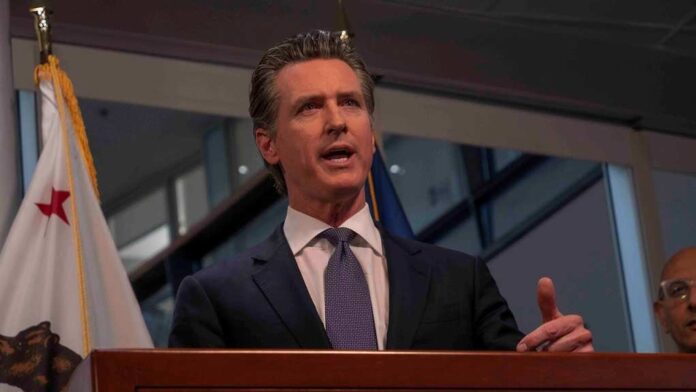 The problem with Democratic leaders is that they think that everyone loves them. Jill Biden and Anthony Fauci show up at the vaccination clinic, and no one wants them around. And so it with Gavin Newsom and the rest of the Nazi-type liberal leaders. People are ready to expire and want to see real leaders such as Ron DeSantis leading the way.

The Floridian governor continues to etch his name in history as he leads Florida into a great future. Along with 15 other governors, he canceled the COVID unemployment benefits, which forces lazy liberals to get back to work. Except DeSantis took the matter one step further and did what he thought was right for the people.

Instead of taking the credit for himself, he allowed the Department of Economic Opportunity to make the announcement and get the credit for putting people back to work. Dane Eagle is the DEO Secretary. Eagle mentioned that “Florida’s employers are also seeing employment growth, as more Floridians, including some who completely left the workforce, are now eagerly reentering the workforce. Transitioning away from this benefit will help meet the demands of small and large businesses who are ready to hire and expand their workforce.”

Ron DeSantis leads by example, and he is not afraid to share the joy and glory that comes with success. He allowed his Secretary to do his job without being micromanaged. A Democrat would have kept his hand in the pot and took over to have the glory for a successful decision at the last minute.

It all comes down to the point that the governor focuses on people. He is not like Gavin Newsom that looks to himself and does whatever makes himself look good. Newsom has selfishly led California into a hole and now faces a recall because of it.

One announcement made about the decision ignored the fact that DeSantis gave the ball to his Secretary. And focused on making it sound like the governor was reacting instead of acting. They taunted the decision by pointing out that Florida has one of the lowest unemployment benefit programs in the nation.

The package is not there for people to live off of. It is low on purpose because people need to be looking for work while on unemployment actively. There is no motivation to look for work when a government program provides more income than work itself.

Anna Eskamani is a Democrat serving in Orlando, Florida. She was against the move saying, “Terrible idea that feeds into Florida’s already broken unemployment system. We will remember this in November 2022.” It was a terrible idea because it makes it, so there are fewer people for her to control.

DeSantis opened Florida up early in the pandemic. And because of his fantastic leadership and decision-making skills, the state has come roaring back with a vengeance. On the other hand, Newsom cannot seem to find the start button to get things going in California.

Eskamani may think that the Floridian system needs work, but she is clueless about what a broken system looks like. The state of California is so busted that it makes Florida’s system look heavenly.

Newsom plans to open specific industries back up but then changes his mind once one COVID case shows up in the state. People cannot seriously get back to normal when a man in power does not stop changing the rules to meet his needs.

Floridian unemployment rates continue to drop. Michael Bernick is an attorney with Duane Morris’s law firm. He mentioned that “As the nation’s new unemployment claims go down, California’s new claims remain high.” In many cases, people cannot even get through to speak with a representative in California.

Ron DeSantis defies all the odds in a liberal-run world. He knows what the people need, and he finds a way to give it to them. His leadership and decision-making skills set him ahead of the rest of the governors. And as for Gavin Newsom, it is just about time for him to pack his bags and disappear into the sunset.