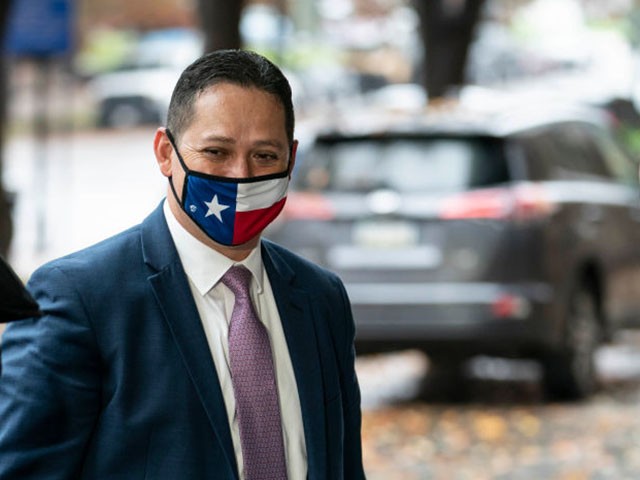 During Saturday’s Republican Weekly Address, Rep. Tony Gonzales (R-TX) stated that “border communities and our Hispanic communities are hurting now more than ever at our southern border.”

“Hey there – I am U.S. Congressman Tony Gonzales. I proudly represent Texas’s 23rd District in the House of Representatives. I am honored to deliver this week’s Republican Address on behalf of my colleagues in the House Republican Conference.

For months now and this week in particular, we’ve heard some incredibly concerning comments on our border crisis from the Biden Administration. Comments made by Kamala Harris and the lack of presence from our President at the border show how tragically out of touch this Administration is with our border communities.

The surge of people traveling illegally into the United States has created unprecedented challenges for law enforcement officers, farmers, ranchers, small business owners. And sadly, my communities have been abandoned by the current Administration. I speak with farmers and ranchers who have had water lines cut or fences destroyed. I hear from local mayors and judges whose cities experience high-speed car chases every day between smugglers and border patrol. I receive texts and calls from friends who find contraband, weapons and drugs accidentally left behind on their property by smugglers.

Progressive policies and open border policy rhetoric have encouraged thousands of people to make the dangerous trek to the U.S. As a result, our border cities are overwhelmed. We have seen heartbreaking, overcrowded shelters for unaccompanied children, trucks full of people breaking down in the desert and groups crossing rivers in the middle of the night. People are risking their lives and making an incredibly dangerous journey, usually lasting weeks or months, to live in our country. Most of the communities in my district are on the frontlines of the crisis. Many people are looking to our federal government, the White House in particular, for answers. Yet top Democrat officials, including the border czar herself Kamala Harris, have yet to visit the border or take a serious look at the crisis. We must support our men and women in green who defend our borders honorably. We won’t see that solution proposed by the White House. My fellow Republicans and I have heard your concerns and we know it’s up to Republicans in Congress to lead.

My life is the American story. Abandoned by my father at two months old, spent time in a battered women’s shelter, on my own at age 15, but after serving our great country in the Navy for 20 years, hard work, and dedication, I am a U.S. Congressman. We have to protect the American Dream, where no matter where you start in life you can do and be anything. One of the most powerful parts of the American dream is it does not have to start in America. The United States is a nation of immigrants but we are also a nation of laws. We need to secure our border, protect our neighbors from chaos and welcome those seeking a new opportunity through legal immigration.