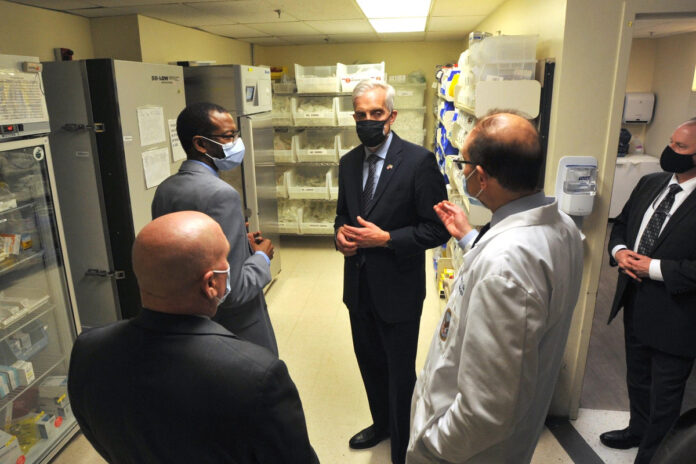 The Biden administration really does struggle with math. And as they look to boost the budget of the Veteran Affairs, it’s becoming quite obvious.

The budget for the VA has been suffering for years. Ask any veteran if they’re happy with the quality of care they are receiving or if they think they’re being properly compensated for their injuries. The answer will be a resounding “no.”

VA officials are asking for $270 billion for the next fiscal year. It’s a lot more than what has been spent in the past, but it’s desperately needed to get the Veteran Affairs budget to the level that it needs to be.

Mike Bost, a Republican Representative out of Illinois, has said “the time has come to ask when VA will be adequately funded.” As a ranking member of the House Veterans’ Affairs Committee, he believes that Congress must work to prioritize veterans.

When you look at the way that Congress has been spending money lately, $270 billion is a small request. After all, shouldn’t we be taking care of our veterans before we take care of many of the other things that Congress wants to spend money on – like gender studies in foreign countries?

For the fiscal 2022 year, there’s an ask for a 10 percent increase in VA spending. The problem is that there are many Democrats that don’t understand the math.

If the budget goes up by 10%, that means that demand for VA services should go up by 10%, too…right?

Wrong. The VA has been significantly underfunded for years.

Proof of that is to show that in 2001, the VA budget was only at $45 billion. That’s not a lot of money to care for the number of veterans in the system. This includes not only their disability compensation but also the care that’s provided at VA facilities around the country.

Over the years, the VA budget has grown – but it’s still not where it needs to be.

Many want to look at the VA budget in comparison to prior years. The budget in 2001 was six times smaller than the budget that’s being requested for 2022.

Rather than comparing it to prior years, Congress needs to look at the realistic number that’s needed to process VA claims and take care of veterans properly.

Veterans have had to sacrifice a lot so that Americans can enjoy life, liberty, and the pursuit of happiness. And as VA Secretary Denis McDonough points out, there are toxic exposure bills sitting before Congress that could end up adding tens of billions more to the VA spending in the next few years.

Bost has concerns that the VA veterans being enrolled is actually dropping. This means that some spending will go down. He’s eager to grow the VA budget, but wants to ensure that it is in line with demand.

Meanwhile, there are Democrats who would love nothing more than to cut from the VA so that the money can go to frivolous other things.

We have to take care of our veterans. Without them, we would not be the country that we are today.

It does appear that there are enough people in Congress who want to fight for our veterans. Caregiver benefits and funding for homeless veterans are both being boosted.

Finally, we can finally see some sensible spending within the budget. Luckily, some money is actually going toward Americans. It’s nice to see that we’re not cutting from everywhere to give to migrants. Now, if we can just boost the budget a bit more for veterans, we might actually save the country.