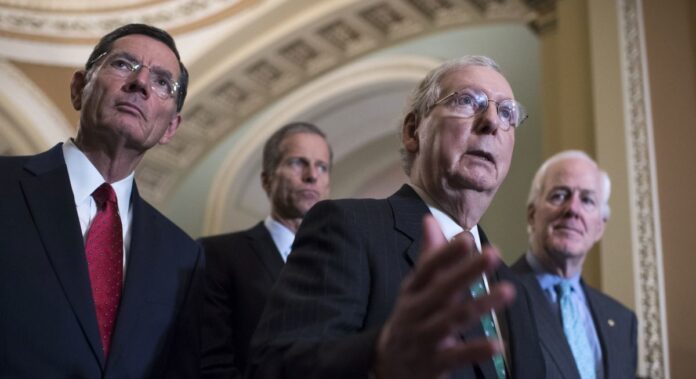 The day before the 2021 presidential inauguration, Republicans found themselves smarting after a blow from an unexpected source: a Republican leader. Senate Majority Leader Mitch McConnell said before the senate that he believed President Donald Trump incited the violence that was perpetrated on Jan. 6.

The political rally was marked by conservatives who were showing up to show their displeasure with an election they believed was rigged. However, McConnell seems to be showing just how ingrained in D.C. culture he is, tipping his aggressively insider hand when he stabbed his own constituents and Republicans in the back, not only blaming Trump but Republicans at large, for an attack that eyewitness and facial recognition (as well as arrest records) have proven to be the fault of Antifa.

“The last time the Senate convened, we had just reclaimed the Capitol from violent criminals who tried to stop Congress from doing our duty,” McConnell said. “This mob was fed lies. They were provoked by the President and other powerful people. And they tried to use fear and violence to stop a specific proceeding of the first branch of the federal government which they did not like. But we pressed on. We stood together and said an angry mob would not get veto power over the rule of law in our nation. Not even for one night.”

For his part, conservative commentator Sean Hannity couldn’t say enough in contradiction with McConnell, voicing on his television show that he doesn’t think Republicans should give impeachment a second thought, calling McConnell “spineless” and saying that Republicans need new leadership in the Senate.

“Establishment Republicans have no backbone, no principle, no courage, no vision. Too many politicians in D.C. are just far too willing to go along, get along, and protect the swamp,” Hannity continued, “and that is why conservatives like myself are tired of these empty promises and your rehearsed speeches and had never getting anything done.”

He even went so far as to say the Senate GOP needs new leaders:

“We need new leadership in the U.S. Senate. You can represent the people of Kentucky. You’re showing basically right now that you’re the king of the establishment Republicans that frankly have always had and remain having contempt for President Trump, but more importantly, the 75 million Americans that voted for him.”

Hannity isn’t alone in his harsh assessment of McConnell’s actions. Steve Cortes, a former adviser for the Trump campaign,  said on the “Todd Starnes Show” on Tuesday that McConnell’s move to blame Trump was “despicable” and one of the reasons he will soon be in the minority, seeming to indicate that all Republicans suffer from McConnell’s fence-straddling.

“I think it is emblematic of why Mitch McConnell belongs in the minority,” Cortes said, eluding to the soon to be chock hold Democrats will have on the chamber. “I’m a believer that if he had just heeded President Trump’s plans to $2,000 direct stimulus to Americans in need, we would have won at least one of those senate seats in Georgia and he would still be the majority leader. Instead, he did not take action and will now be in the minority.”

According to the former Trump campaign staffer, McConnell has been showing his true colors for some time, resisting the items on the “America First” agenda, but shying away from coming out and saying he opposed the popular plan. “Cortes said that McConnell’s political calculation is not even smart,” Cortes said according to Todd Starnes’ assessment.

His attempt to play the role of a centrist Republican who will be embraced by the media and Democrats will not work while the Republican base—which is made up of Trump supporters—will see his overtures as a betrayal.