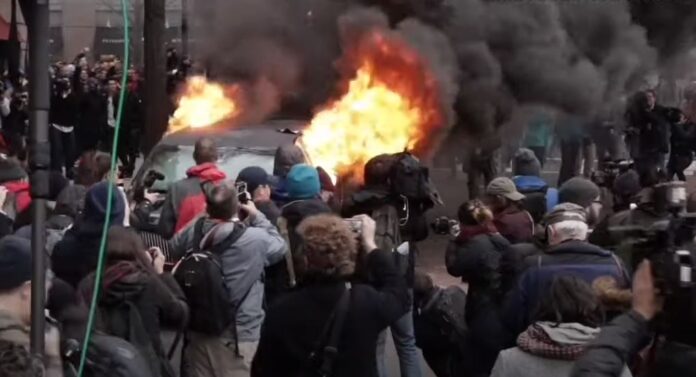 This is the footage that the liberals do not want anyone to see. They want everyone to believe that they are the peaceful types who would never behave in such a manner. Now, the footage is out there and we can’t wait to see how they manage to explain it away. This dramatic imagery has never been seen before.

It will be interesting to watch certain perceptions change as the footage becomes more and more widespread. The video was shot as part of an ongoing documentary. The documentary aims to showcase the battle for dominance that is currently playing out between independent news organizations and establishment organizations.

Those who are willing to watch the truth unfold will see a coordinated attack. The 2017 inauguration of President Donald Trump was the target. There are anarchists who are clearly preparing for the violent confrontation that they are about to have with the police officers who are on the scene.

Attendees who were unfortunate enough to cross the paths of the rioters were attacked, too. These are the people who claim to belong to the party of empathy. They are the ones who supposedly care about the nation as a whole and want everyone to get along. Property is also destroyed and there are even physical premeditated blockades that are rather successful when it comes to the prevention of voters from attending the Presidential Inauguration.

Code Pink and Disrupt J20 are responsible for the blockades. In their minds, it is acceptable to try and shut down an inauguration because they don’t like the president. “Are you guys going to cause some mayhem?” is the question asked of one of the Code Blue organizers. The gleeful “yes sir!” response is all we needed to see.

“We blocked this street because we feel like we have the right to tell them not to come into our city,” the organizer continues. This is the sort of behavior that is always considered acceptable when the liberals partake but no one else is allowed to do so. The things that these organizers are willing to say on camera say a lot about them as well.

“These people should be referred to as neo-nazis, as fascist, as the legitimate scum they are, so they can be wiped from this country!” said another. The worst treatment is directed towards the black people who support Trump that happen to be on hand. The same white liberals who yell and scream at anyone who is supposed to have mistreated black people sure do forget their manners in these types of situations.

Hurling phrases like “uncle Tom” at anyone who you do not agree with is the liberal M.O. these days. This is disgusting behavior from people who claim to champion causes that are important to black people. They are only as good as their vote to white liberals, though. These jerks even went around snatching people’s MAGA hats off their heads. This is what makes us laugh when they try to act like they are so kind and decent.

The liberals show their true colors every single chance they get. We all know it and we all see it. Unfortunately, one side of the conversation is not willing to do what is right and stand up for law and order. So why did the filmmakers elect to release this footage right now? The explanation that they provided for this decision is very illuminating.

“It was never our intent to release any footage while we’re still in production. We have held this dramatic content for 4 years in anticipation of its final release in the completed film, however, recent events have convinced us of the imperative to release this excerpt now,” they said. This documentary has been in production since 2016 and is slated for a wider release later this year. We cannot wait to see the finished product and we will be sure to discuss it in greater detail as soon as possible.