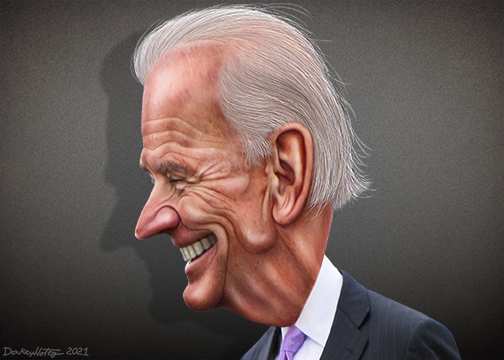 Joe Biden shows how weak he is as he changes his mind when it comes to keeping a promise to defend freedom of religion in America. The Department of Justice made a quick change to some wording in a court report. They decided to remove the word “vigorously” from phrases that stated they would vigorously fight for freedom of religion.

The LGBT community just cannot bring themselves to accept that not everyone is going to approve of their way of life. They have the insane need to force people to accept them and their choices. And this time around, they want to force Christian colleges and universities to let them attend the school even though it violates codes of ethics and beliefs that have been around for hundreds of years.

Joe Biden had promised to fight for the school’s right to operate as conscience would dictate. But now, it seems that he is weak enough to be bullied by the LGBT activists into letting them walk all over the private universities.

The word that was chosen to replace “vigorously” was “adequately.” Biden will do something to fight for the schools, but he does not know what he will do yet.

The schools have the right to operate according to their belief statements. The LGBT people want to remove their funding if they are not accepted as students in the schools. There are plenty of other schools that they can attend. But they just want to make a political example of Christians because deep down, they cannot stand the fact that they are right about the abnormal lifestyle The LGBTs are portraying.

The media stated in a report that However, in a possible sign of the pressure on the administration, the Justice Department amended the document Wednesday, taking out the word “vigorously” to describe its defense of the religious exemption and retaining multiple uses of the word “adequate.”

The firestorm that Biden has started is showing once again that he cannot be trusted to keep his word. He has no intentions of fighting for private schools and their right to operate consistently with their doctrinal beliefs and constitutional bylaws.

The report also stated that the DOJ “removed wording that said the Education Department and the Christian schools’ share the same ‘ultimate objective’… namely, to uphold the Religious Exemption as it is currently applied.’”

Biden is making his move to distance himself from religious people because he wants to embrace his new friends within the progressive party. He wants to please his new masters.

The issue comes down to a few people in the LGBT community who were offended again over Biden’s wording to the courts.

Carlos Southwick is the director of the Religious Exemption Accountability Project. He stated that “What this means is that the government is now aligning itself with anti-LGBTQ hate in order to vigorously defend an exemption that everyone knows causes severe harm to LGBTQ students using taxpayer money. It will make our case harder if the federal government plans to vigorously defend it like they have indicated.”

All Biden has done is set the schools up to fail at keeping their freedoms. The message that Biden wants to send is that “This lawsuit wants the federal government to tell Christian schools, ‘To continue accepting students who have federal financial aid, all you have to do is to start acting contrary to your own beliefs.’”

David Cortman is Senior Council with ADF, and he continued to say that “That’s neither reasonable nor constitutional. No court should grant a radical request to rewrite federal law and strong-arm religious colleges by stripping their students of much-needed financial aid. For that reason, we are asking the court to let our clients intervene in this lawsuit so that they and their students can defend their freedoms under federal law and the Constitution.”

Biden thinks that he can force private schools to obey by using money as a weapon. But the truth is that he does not have the right to force anyone to compromise what they believe in a country founded on freedom of religion.