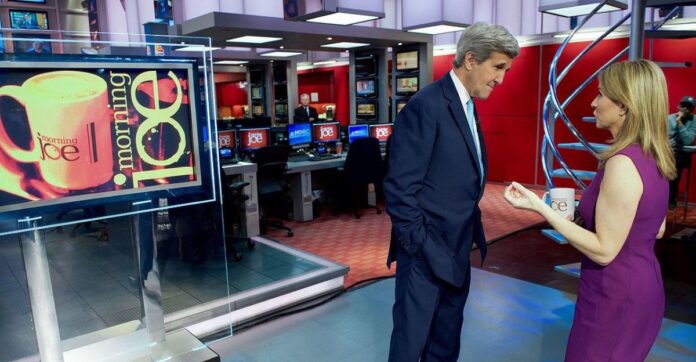 Biden has been preaching all sorts of national unity and healing during the lead up to the big transition, hasn’t he? That’s one of our favorite aspects of the whole thing. To be fair, there are also a sizable number of Trump supporters (read also: Q adherents) who believed that there would be a mass arrest in the Democratic party during the big ceremony yesterday.

They truly thought that there would be a changing of the guard yesterday, in the sense that Donald Trump would be installed as the permanent president. We say that to this: we are not unaccustomed to news coming out of left field. MSNBC’s Nicolle Wallace and Ben Rhodes decided to take a strange day and make it even weirder, though.

They are not the sanest reporters in the bunch but they managed to take something that the average American would be concerned about and bend it into something else entirely. Their latest bit of insane rhetoric led to immediate responses from those who were being called out.

.@NicolleDWallace calls for the permanent expulsion and punishment for any and all forms of conservative media that run counter to her political views. She says Republicans should be BANNED from speaking unless they first speak “the truth.”

So, what camp am I going to, Nicolle? pic.twitter.com/h0cpvxitKd

“@NicolleDWallace calls for the permanent expulsion and punishment for any and all forms of conservative media that run counter to her political views. She says Republicans should be BANNED from speaking unless they first speak “the truth.” So, what camp am I going to, Nicolle?” asked Curtis Houck.

So what did they say to have everyone so hot under the collar?

“A Republican must assert the truth,” Wallace claims, “before they’re allowed to share any other views.” Before anyone says that the same standard should be applied to MSNBC, let us stop you right there. Free speech means free speech, no matter who is being discussed. No one is looking to silence, nor should they.

The First Amendment guarantees everyone the right to be as stupid or insulting or non-factual as they want. The government does not have the right to silence anyone and they certainly cannot focus their attentions on the musings of one political party like this. Those who make their living offering up political speech should remain well aware of this at all times but they are often the first ones to forget.

Who is Wallace appointing to carry out this insane task? How does this help us to “come together and heal as a nation”? It doesn’t. It’s just more liberal insanity disguised as a helpful policy.

Ben Rhodes calls for there to be “years” of a firm and brutal “detox” of “lies” and “hate” from the entire right side of the aisle in America and that it must be done through the use of “national security” and “Homeland Security” officials. pic.twitter.com/PmWtcV2f6k

“Ben Rhodes calls for there to be ‘years’ of a firm and brutal ‘detox’ of ‘lies’ and ‘hate’ from the entire right side of the aisle in America and that it must be done through the use of ‘national security’ and ‘Homeland Security’ officials,” read another tweet from Houck.

Rhodes is also the same menace who was boasting about the echo chamber that he helped to create when it came to the Iran deal. Perhaps he isn’t the best person to be delivering this type of message. The New York Times has the full context for the “echo chamber” statement back in 2016 and it is every bit as inflammatory as expected.

“As Malley and representatives of the State Department, including Wendy Sherman and Secretary of State John Kerry, engaged in formal negotiations with the Iranians, to ratify details of a framework that had already been agreed upon, Rhodes’s war room did its work on Capitol Hill and with reporters.

“In the spring of last year, legions of arms-control experts began popping up at think tanks and on social media, and then became key sources for hundreds of often-clueless reporters. ‘We created an echo chamber,’ he admitted when I asked him to explain the onslaught of freshly minted experts cheerleading for the deal. ‘They were saying things that validated what we had given them to say,’” said the Times.

To get back to a healthier form of political discourse, bad speech needs to be replaced with better speech. Anyone who works in an industry that is based around the First Amendment should know this already. Those who think that they can silence Republicans on a whim are in for a very rude awakening.