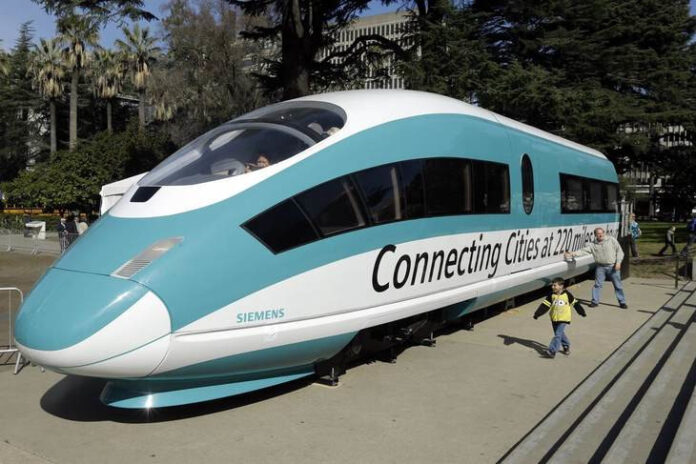 California is a state that cannot seem to stop chucking money down the drain. If you are anything like us, it can be a lot of fun to watch. However, many of the state’s residents would have liked to forget one of the state’s latest acts of stupidity. The California high speed rail project has since been brought back from the dead by none other than Sleepy Joe himself.

The “bullet train” talks have returned and not a moment too soon. Donald Trump was responsible for shutting this faucet of ill gotten money down before. In his ongoing quest to undo anything positive that took place under the previous administration, Biden has restored over a billion dollars to the project.

The White House has announced that they are going to be providing a $929 million grant to make this insane project a reality. The project is on its way to Sacramento but this is of little comfort to the local taxpayers. Perhaps they will take solace in the fact that there is a small chance that they could get it right this time. We highly doubt that would happen but what can you do?

The proverbial horse is already out of the barn. Reuters has more about this developing story:

The parties, which also include the California High-Speed Rail Authority and the U.S. Transportation Department, agreed to restore the grant within three days, according to the settlement agreement.

Talks began in March, around two months after Biden became president, to settle a suit filed in 2019 after Trump had pulled funding for a high-speed train project in the state hobbled by extensive delays and rising costs. Trump had repeatedly clashed as president with California on a number of fronts.”

So where is the magical money pile off to now? Initially, the rail line was supposed to serve as a connection between Los Angeles and San Francisco. San Diego was going to be added later, potentially. The initial cost of the project was pegged somewhere around $33 billion and it was supposed to have been completed within the year. The pitch was first offered up over a decade ago.

By the time 2019 rolled around, things were an absolute mess. The wheels had totally come off by this point. Costs were ballooning out of control and reports showed that the bill would reach nearly $100 billion if they even completed one small portion of the line. That does not seem too useful to anyone who is looking to travel between Los Angeles and San Francisco on a regular basis.

Even Gavin Newsom did not seem too thrilled about the project and he shut down that same year. Biden is the one who is deciding to start it back up now. While the Democrats are going to pretend that they are combating climate change, nothing could be further from the truth. In order to bring the project back to life in full, the state of California is going to have to come up with the additional $20 billion that is needed. Where on earth is this money going to come from?

The American taxpayer is going to be asked to pony up once again. The train is also supposed to function on electricity but where is all of this electricity even going to come from? This is another question that Biden would probably like to avoid, as they are going to need to burn a sizable amount of fossil fuels to make this fantasy into a reality.

It’s an absolute joke but no one should be laughing, especially not in the state of California. This state cannot seem to stop tripping over their own feet. Since they have already filed a lawsuit over Trump’s refusal to keep the money spigot turned on, we suspect that they are happier than they let on. Newsom’s power grap continues!