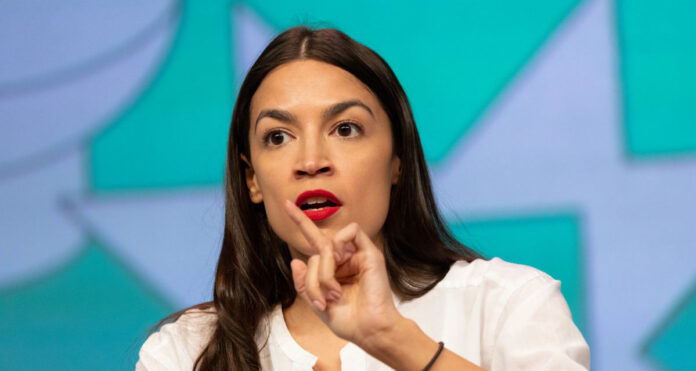 There has been a lot of speculation about the role the Democrats play when riots start. Many believe that the rich liberals work behind the scenes to get their terrorist enraged enough to get out and march. 2020 has shown that some of that speculation is true.

Some Democrats were caught at rallies that turned violent and had to be dealt with by law enforcement.

Alexandria Ocasio-Cortez still is breathing free air despite her hopes to destroy a free America. Her mouth is the object that usually gets her into trouble, but this time around, it was her feet that got her caught doing things to push violence and senseless demonstrations.

This week the sickening woman had the audacity to show up at a picket line of workers that were on strike. These grocery store workers took to the streets demanding more pay. They saw themselves as “essential workers,” and they were not happy just to have a job through the pandemic. They want more money out of it as well.

Workers are ON STRIKE at the Hunts Point Market, which supplies 60% of NYC’s produce.

Follow @TeamstersJC16 for updates and show up at 772 Edgewater Rd if you can join in person! https://t.co/gnLavV67oL

This is where Ocasio-Cortez shows up. She is the one that killed an Amazon plant building contract from being developed in her district. It would have provided high paying jobs to a lot of people struggling to make ends meet. And now here she is encouraging the strike for more money.

The tax money thief showed up with her rich little gloves on with hand warmer inserts and cheered them on throughout the day. Her little political stunt does not show that she cares about the people having good-paying jobs.

She could have supported that idea when Amazon came knocking on the door. But she stood in the way and kept people in the poor house.

Her can of Café Bustelo is something of a status symbol. It is not something that just anyone can afford to drink every day. The little socialist was there trying to get a modest raise out of the grocery chain that has been struggling through the pandemic.

Ocasio-Cortez has no concept of fair pay. She may get the modest raise they are looking for, but the store will have to raise prices just to be able to afford the higher wages. And the very people that got the raises will end up paying it back to the store just to buy the toilet paper that AOC encourages people to hoard.

Over 1,400 people are on strike. These people are responsible for moving nearly 60 percent of New York Cities produce.

Thirty thousand trucks make their way through the complex daily. The pandemic has caused many issues, and now that the liberals are encouraging people to strike in New York, it just adds to the pain and suffering that their greediness is causing.

The greedy union workers earn nearly $21 per hour. Their union bosses want to see the company fork out another dollar per hour raise. The company came back and offered $.32 per hour. But that was not good enough.

The union seeks to put a stranglehold on the corporation to the point where they will have to start firing people just to pay for the workers’ greediness. This is the first time in 35 years that there was a strike at this company.

Ocasio-Cortez just could not resist the temptation to join in on the fun. After all, she can show up and stoke the fires and sit back and see what happens. Because, after all, she has nothing to lose since she is stealing taxpayer money by being there in the first place.

Her witchy little mouth echoed out, “The more we talk about this, the more we can put on the pressure so that we not just get a buck, but that we change lives for people across this country. So, thank you for doing that work!”

No one even cared that they were on strike. Their obsession with money is not going to affect anything that happens in other places. This fight is between the company and the union workers.

⁦@AOC⁩ on making what is upside down right side up. Which is another way of saying worker power

AOC needs to keep her Pinocchio nose out of the way. The only thing she said that was truthful was that change happens with the people and not through politicians like her. The United States no longer needs AOC, so it is time to fire her.