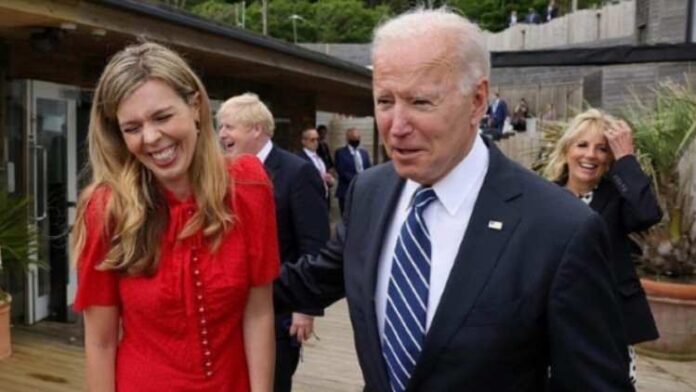 Biden’s perversions know no limits, do they? This man is incapable of keeping his hands to himself. Where his handler for this? This seems like something that “Dr. Jill” should be fixing. When these two arrived in Cornwall on Thursday to participate in the G7 summit, we never thought that things would get this ridiculous.

UK Prime Minister Boris Johnson’s wife was the apple of Creepy Joe’s eye and we are sure that Boris had to be thrilled about that. Boris Johnson’s young wife, Carrie Johnson, was on his mind as soon as he arrived in England. You can tell that he was looking forward to this moment for some time now. She’s only 33, which adds to the level of creepiness.

“Wait a minute! Wait a minute!” he yells. This is the most passion that we have seen from him during his entire presidency. Imagine if he cared as much about the country as much as he cared about pawing the wives of our allies. Boris Johnson is a good sport because if this was us?

Let’s just say that we would have wiped the smirk off Biden’s face and then slept like a baby. The funniest part of all is when he walks right past the outstretched hand of Boris Johnson. That had to be an infuriating moment. “Good to see you! Best wishes!” Biden calls out to Carrie.

She seems to be used to his insanity by now but our heart goes out to her anyway. Imagine how you would feel to be in a situation like this one and all of a sudden, Creepy Joe Biden wants to have his hands all over you. The quartet decided to then take a walk down the Cornwall shore and that’s when things got particularly hilarious. It probably wasn’t as funny if you’re a Democrat but please bear with us.

Biden couldn’t resist hitting on Carrie one last time. “I’m very grateful to be here, particularly to meet —,” he says before the video cuts away from him. They were probably trying their best to keep him from any further embarrassment. That’s all they can do at this point. It’s not like they are going to be able to trust him to keep his hands to himself.

This isn’t even the most ludicrous thing that Biden has done when it comes to women and making them feel uncomfortable. Remember when he was accused of sexual assault? These credible accusations were not enough to put a stop to his presidential campaign, though. That’s because the Democrats only care about these things when they can use them to tell Republican voters what they need to think and feel.

It’s not like the accusation happened in a vacuum, either. There were also stories being told about just how much Biden seemed like to smelling women’s hair. Obviously, this is not a normal sort of thing to do but that did not matter to the far left. They wanted any president that they thought they could shove through and Biden happened to fit that bill.

To be fair, they would have looked the other way for almost anyone. The level of desperation that they had when it came to getting rid of Trump was absolutely off the charts. Circling back to the video, you can see how infatuated Biden is with his wife. “I’m thrilled to meet your wife,” Biden told Johnson. “We both married way above our station.” This is the sort of inappropriate commentary that Biden cannot keep himself away from.

Biden told the press the two had something in common. “We both married way above our station,” he joked. https://t.co/UMbVxLcfVt pic.twitter.com/gfwDeJ0Ei2

At least these two have their own “special relationship” to fall back on. Maybe Johnson felt less slighted knowing this. If we had to guess, he and other foreign leaders are simply used to Biden’s perverted behavior and know how to laugh it off by now. They shouldn’t have to and it should never have come to this but this is Biden’s world now. We just live in it!