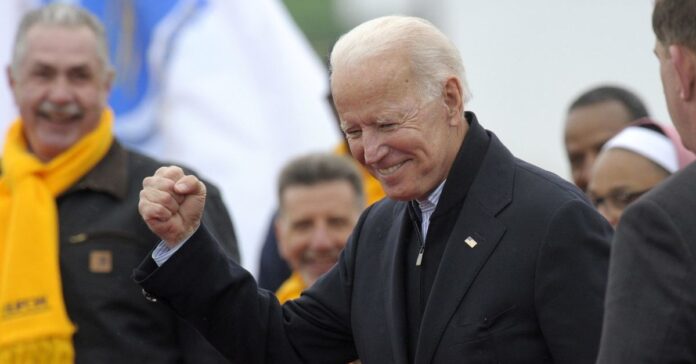 Joe Biden’s decision to undo all of the executive orders that President Trump issued is a clear and unnecessary abuse of power. He hates the Republican president so much that he is willing to use executive authority to erase his name from political history volumes. Biden just cannot stand that Donald Trump is far more successful at being a president than he ever will be.

Every time Donald Trump used his executive powers, the Democrats would cry about an abuse of power. They even cried when he used those powers to protect the country. Yet, there is no such outcry of abuse of power coming from their mouths even though Biden’s usage is frivolous and clearly out of hatred.

The four years of Donald Trump were the best the United States has ever seen in many decades. For the first time in many years, the country was safer, and other nations had respect for the nation. America’s enemies were scared to attack because they knew that Trump would respond with force.

The executive orders that Biden signed on his first day had nothing to do with things that mattered. They were a peace gesture to the people that were still on the fringes of supporting Biden’s pointless presidency.

The illegitimate president simply did not have it within his essence to honor any of his promises. Even his mentor and self-proclaimed demi-god Obama stated that he should not use executive orders to react to Trump’s successful policies. But Biden either ignored or forgot about this recommendation.

Obama then stated that Biden should work with the legislature to get his agenda and goals accomplished. But so far, the executive pen has been his weapon of choice. Biden’s main goal was to prove somehow that his pen was mightier than Donald Trump’s pen. The only thing his pen has done was to erase the name of Trump from the White House.

Biden had an agreement with Republicans and other Democrats that he would work with them. But he has so far only halted the border wall construction, messed up immigration, and allowed illegals to stay longer. He has abandoned his word and proven to all that he is a convincing liar that has no intention of being honest and true to his word.

Biden and his legislature are acting as two separate entities instead of working together. Biden should have worked with and let the people decide if they wanted Trump’s policies to remain in place. But he did what he wanted to do on his own. Like every Democrat in power today, he is ignoring the people and acting like an evil tyrant.

His decision to end travel bans from places that were sending terrorists to the country shows he loves violence, allowing people who are not true citizens to be counted on the census to abandon fairness and honesty. And to whine about questions from the media is just plain cowardness.

His other five executive orders make no sense at all. He makes good with the WHO that deliberately unleashed a deadly virus on the world. He killed American jobs and set up rules that he allows himself and his family members to violate.

Joe Biden set himself up as a dictator and surrounded himself with other Democrats to keep people off balance and realize his real plan to kill the American spirit.

Joe Biden has no intention of moving the country forward. He seeks to copy what Obama did a few short years ago. And the only way that he can do that is to erase Donald Trump from history.

His senseless actions to abuse executive powers ignore the people’s wishes and show that he is not a man of his word. Biden has clearly missed what brought Donald Trump to the White House. They were tired of the liberal neglect that Obama and Biden brought with them when they first destroyed the country.