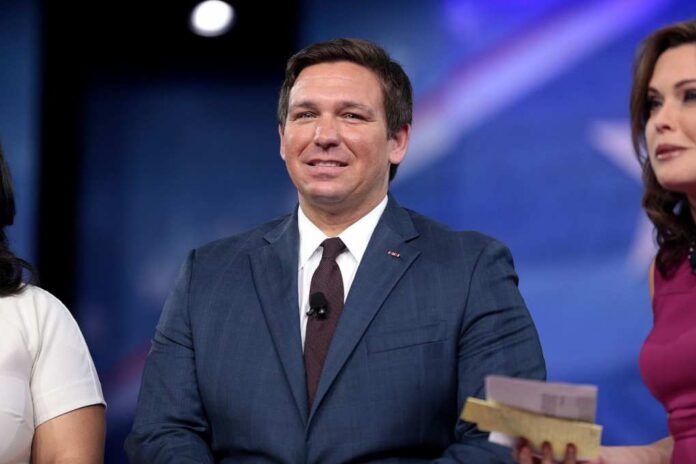 Republican Governor Ron DeSantis of Florida just responded to the question regarding signing a bill that would ban transgender surgeries for minors. His answer was pretty clear: “That would be something that I would sign for sure.” He also took a shot at the “woke” corporations saying that “They tend to genuflect before whatever the most recent left-wing cause is.”

The interview in which DeSantis made these claims was with The Daily Caller. The governor was asked, “Is Florida interested in passing the kind of legislation banning transgender surgeries for minors?”

And the governor replied: “I’m very much opposed to chemical castration of minors. I think that that’s a really, really— I think, honestly, I didn’t even know that this existed until a few years ago. So that would be something that I would sign for sure.”

The Daily Caller noted, “Earlier this year, Florida lawmakers introduced legislation to ban transgender surgeries and procedures for children, titled the Youth Gender and Sexual Identity Act, but the bill died in a Professions & Public Health Subcommittee on April 30.”

These questions came after DeSantis was asked about the legislation he signed to ban biological males from women’s sports. The Daily Caller noted that not every governor is willing to sign such legislation and they asked what caused the governor to sign the bill.

“Well, look, it’s discrimination against our women athletes to force them to participate against male athletes,” he answered. “Selina (Soule) from Connecticut came in; she missed New England regionals for track by two places and both of the people who beat her were biological males. And so if she had had a level playing field she would have not only advanced to regionals, she would have won that track meet.”

Soule thanked the Florida governor at a press conference saying:

“As someone who was one of the first to start speaking against this injustice, it is very encouraging that my story has reached people across the country and that many have seen what’s happened in Connecticut and want to take the stand to protect female athletes in their state effort to protect women’s sports so no other young girl has to go through the same pain and heartbreak I had to endure my four years of high school. I am grateful to Florida lawmakers and especially Governor DeSantis for preserving fairness and women’s sports and allowing countless young girls and women the opportunity to succeed in the sport that they love.”

This story was personal for DeSantis, “And so my view — I have two daughters —I want them to have the opportunity to do things and follow their dreams but it needs to be a level playing field and it needs to be fair and it should all be based on biology, not based on ideology.”

The Daily Caller pressed, “And why do you think some Republican governors are reluctant to sign legislation like you did?”

“I think it’s just corporate pressure; I think the corporations have gotten very woke; they tend to genuflect before whatever the most recent left-wing cause is,” DeSantis said very matter of factly.

“They just don’t like getting the blowback; they don’t want to be the subject of a social media mob or things like that, And so I think that they have taken that posture, but you can’t let them — like some woke corporation, you’re going to turn over the reins of government to them and let them set the policy? That ain’t happening in Florida, and so we’re not gonna be deterred by that,” he continued.

DeSantis finished the interview with these pointed words, “In fact, when this was going through the legislature, the NCAA came out, they didn’t direct it at Florida, they said, we’re not holding events in any place that protects women’s sports — and I told the Speaker who’s here, I said, ‘Man, we’ve got to get this done. We cannot be bullied.’ And so we did, and now they’ve basically said, we’ll hold events. And here’s the thing: If you don’t hold an event, fine. I’m not going to ruin opportunities for millions of young girls in Florida just to hold an event. That’s an easy decision for me to make.”