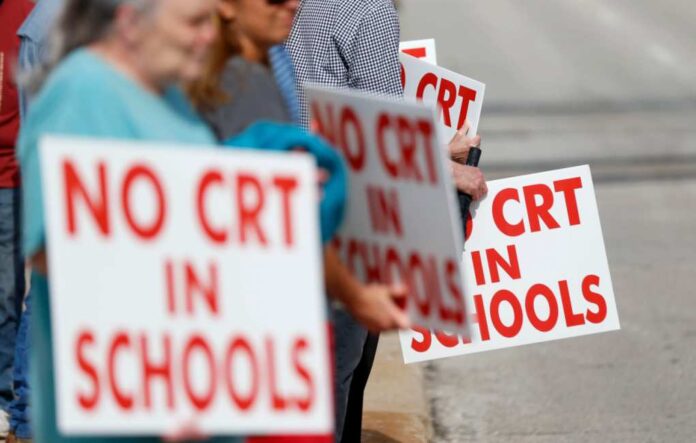 Critical Race Theory (CRT) has been popping up everywhere – workplace boardrooms and classrooms all over the United States. Many of the trainings focus on teaching that systemic racism is everywhere and that we must judge people based on skin color.

It’s one of the most divisive things to hit the country in decades. Now, there’s a division between Black and white people more than ever. And, more often than not, it’s actually causing Black people to be more racist toward white people based on history and the CRT teachings.

Various GOP members are stepping in to introduce bills that would ban the teaching of Critical Race Theory. Florida, Oklahoma, and Idaho have already banned it – and many more are stepping forward to get it banned.

Of course, there are plenty of Democrats willing to jump in to defend Critical Race Theory. Former President Obama makes the comment that instead of debating Biden’s issues on the economy or climate change, Republicans would rather focus on CRT.

“Who knew that that was the threat to the republic?” He goes on to question.

Is he joking? Critical Race Theory wants to teach that white supremacy is a continuous issue within our society and the structure of our government. It is absolutely a threat to the public when the people pushing CRT want to “whitewash” every white person and demand that every white person apologize for being white.

With the push of CRT, we erase important parts of history.

Has the country not already made plenty of amends? All people in the United States, regardless of race, have the ability to vote, attend a higher educational institution, own land, and even hold public office.

If white supremacy was everywhere, why is it that not every black person is on board with CRT? Surely, if racism were everywhere, every person of color would be upset.

There are too many Black people arguing against CRT.

It’s important to note that Critical Race Theory is just that…a theory. There may be some fact behind it, but it’s only one of the many theories that are used to identify that there’s an issue.

Scientists have identified that there are often more differences within the racial groups than between them.

How is it that we, as a country, can claim that every person of color fall within a single race? Some are from Europe, some are from Africa, some are from the Caribbean – there’s no shared history between many.

Yet, somehow, the liberals have decided that all people of color need to be compensated for the shared history of being enslaved. It’s not accurate, and it perpetuates division within the country.

Yet, liberals who push the CRT want to identify that there’s still institutionalized racism in schools, courts, and within state and federal law. Many claim that the country continues to reinforce the idea that Black people are inferior to white people.

We have had a black president. Black students can partake in the same public education that white students can. And, Black people are considered a minority, opening up doors that white people couldn’t dream of opening – Scholarships to go to college, various job opportunities, grants to become business owners, contracts with the city that only go to minority groups.

Reparations have been made.

It’s time to bring the country together with unity. The problem is that’s not what the liberals want. They want to tear the country apart – and they’re using CRT to make it happen.

No one wants to talk about what the Critical Race Theory is really supposed to accomplish. The only thing it’s managing to do is make white people feel guilty and ashamed for things that happened decades (and even centuries) before they were born.

We cannot allow this hatred and division to enter the schools. We must unite or prepare to lose our country to hate and violence.