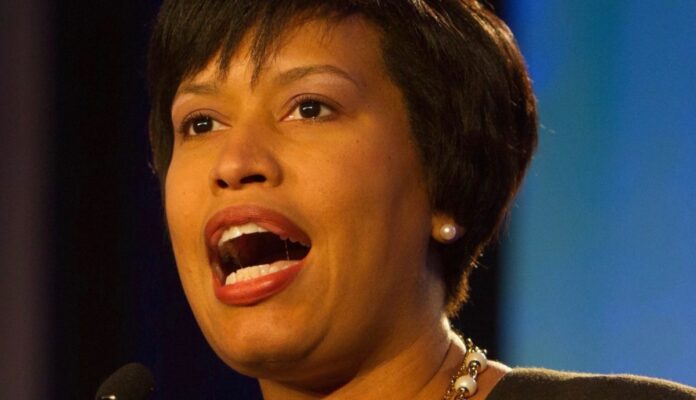 Muriel Bowser is the mayor of Washington, D.C. and she has a lot to say at the moment. The same mayors that were all doom and gloom before are now full of sunshine and rainbows. Can you believe that they are now going to be willing to open up local restaurants for indoor dining? It’s funny how that works out, isn’t it?

Bowser claims to be from the party of science but this does not align with what they have been saying as of late. Is this a coincidence that these announcements are being made right after Biden enters office? Probably not but we are sure that’s what we are going to be told. They wanted everything shut down to make the GOP look bad.

The Democrats shut the economy down to suit their political purposes and now people are going to learn the hard way. The far-left thought that they were going to be paid to sit home all year and that is simply not going to happen. When the GOP held the White House, that was not what was being said.

Instead, anyone who thought that the economy needed to be reopened was treated like some sort of fool that didn’t care whether people lived or died. FOX Business has more on Bowser’s decision. “Washington, D.C., will roll back its COVID-19 restrictions on indoor dining beginning Friday, Jan. 22 at 5 a.m., allowing restaurants and bars to return to 25% capacity or no more than 250 people.

The move, first announced on Wednesday in a tweet by D.C. Mayor Muriel Bowser’s chief of staff, John Falcicchio, aligns with the end of an “Inauguration Pause” on the city’s Phase 2 reopening activities.

The “Inauguration Pause” was an extension of a Dec. 23 order implemented to flatten the curve amid a surge in coronavirus cases, which was set to expire on Jan. 15. Bowser cited ongoing “public health and safety” concerns as the reason for the extension, following a riot at the Capitol by pro-Trump protesters on Jan. 6 that left five people dead,” begins their report.

It already doesn’t make much sense to us but hey, what do we know? We are not nearly as intelligent as Joe Biden or Nancy Pelosi. These are the scientific adherents who are going to lead us out of this abyss. This was not all, though. The report continues and we are about ready to give up on the idea of fair governance.

“In addition to shutting down indoor dining, the order closed museums and the D.C. Circular Route along the National Mall. It also limited libraries to pick-up and drop-off services only for three weeks, ordered the Department of Parks and Recreation to offer reservations for individual swim and fitness room sessions only and required that all non-essential business employees telework, with the exception of in-person staff needed to support minimum operations,” FOX Business states.

“Covid cases are up something like 30% in DC over the past month and are generally going up around the nation—what’s changed to cause this?” asked Arthur Boreman. It’s a very good question that no one has been willing to offer up a real answer to. We’re supposed to believe that this is some sort of magical coincidence that no one could have ever seen coming.

Covid cases are up something like 30% in DC over the past month and are generally going up around the nation—what’s changed to cause this? https://t.co/bqhafK1LRw

Anyone who pays even a modicum of attention knows how likely this was. The same virus that was supposed to be bringing America to its knees is now perfectly okay to live with. Those who point this out are going to be painted as big meanies. Watch how long it takes before people start losing their Twitter accounts for pointing this out.

We are surprised that the tweets we have already seen about this subject were not immediately flagged for spreading misinformation. This provides precious little solace to the small business owners whose lives have already been destroyed.

The Democrats could not care less about their needs, though, that is for certain.