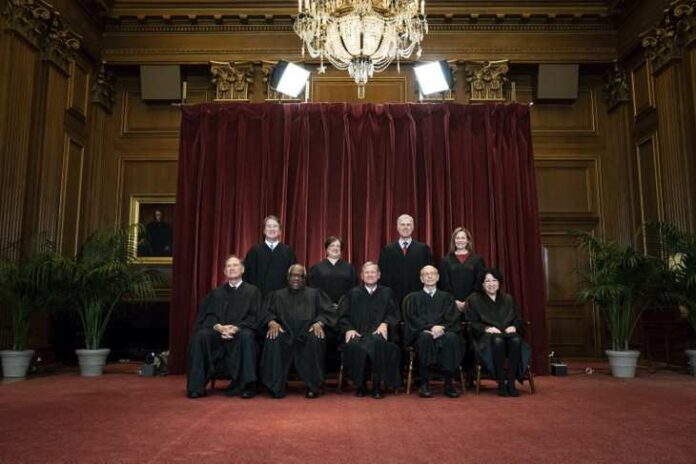 Democrats everywhere are hoping to find the support they need to pack out the Supreme Court to eliminate the last barrier that keeps them from destroying America. The high court has a conservative majority, which causes them ulcers as they keep advancing their agenda. But the court has sent a clear message to Biden that they do not want any more judges giving their opinions in voting unanimously on specific issues.

The Supreme Court is not the only group telling Biden to back off. Mitch McConnell was interviewed and asked specific questions about what he would plan on doing if he were to become Majority House Leader again. And his answer was spot on to the point that the Democrats are cowering in fear.

The progressive wackos are determined to pack the court with their version of satanic judges. It is a political move to destroy the Constitution and personal freedoms while having the support of their hand-picked judges. By packing the court, the liberals would be able to quiet the voices of the oppressed from being able to fight back.

The pushy Democrats want Supreme Court Justice Stephen Breyer to step down and retire early. They want his position so they can put an extremist in his place. And they need him to leave in the next year so that Chuck Schumer can push through the next liberal judge.

McConnell is a Senator for the people. He knows the danger that another liberal judge would have on the country. Justice Breyer is against packing the court. He does not subscribe to the horrible agenda that Biden wants to push through.

Biden’s plan to pack the court would give him the ability to fill every position with a person of his choosing. There would be no discussion or any bipartisan effort to fill the positions. Biden would nominate, and the liberal Senate would place them in position. That would effectively give the Democrats control of all three branches of government.

Two court cases are of great concern for the Democrats. One deals with the right of private citizens to own guns, and the other tackles the issue of abortion. The Democrats need to control both of these cases to legally murder people and take away the ability that the public has to defend itself.

The Democrats would be able to force people into compliance if they lacked the weapons to defend themselves. But the current makeup of the court will not allow them the means to take control of people.

Breyer has been on the court for nearly 27 years. The issues of guns and abortion are the reasons why he has not already retired. Biden and other Democrats are already pressuring the man to step down so they can put a younger and more sinister justice in his place. Democrats are very good at telling people they are too old and are no longer helpful to their cause.

McConnell was clear that once the Republicans take back the Senate, he will hold the Democrats in place and not allow their selfish priorities to infiltrate Constitutional law. Packing the court will not be an option that Biden and his fellow party members.

McConnell and other members of the Republican Party are going to focus on helping their candidates win in 2022. They have funds set up for the sole purpose of funding races of candidates that are having trouble finding the capital to beat out their competition.

McConnell stated that “There’s no question that in order to win, you have to, in most states that are going to determine who’s in the majority next time, you have to appeal to a general election audience. And some of the candidates who filed in these primaries clearly aren’t. I’ll be keeping an eye on that. Hopefully, we won’t have to intervene. But if we do, we will.”

It will all come down to the 2022 election. The Democrats need to win back every seat to remain in power. But they have screwed up the country so bad that people want them out of office. And packing the court would be the worst screw-up of all time.