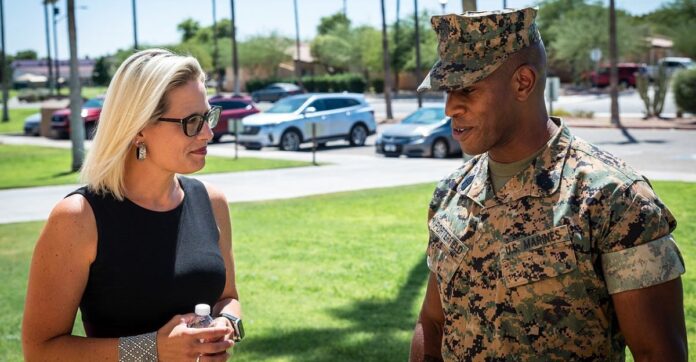 When the Democrats won the Georgia Senate race in early January, taking the thinnest of majorities in the Upper House, it seemed all hope for a fair and just Congress was flushed down the drain. That is unless you consider West Virginia Democratic Senator Joe Manchin.

While a staunch Democrat, the man is known for not always following party lines, which is likely why he has had such success in the typically red state. In addition, he is definitely something of a moderate, which makes him less likely to vote for unconventional and progressive ideas. Suffice it to say, as conservatives, he has become our saving grace and hope in recent days.

However, recently he’s not the only one to give conservatives everywhere hope for a brighter future.

Enter Arizona Senator Kyrsten Sinema. Like Manchin, she is a Democrat through and through. And also, like Manchin, it seems she puts a significant amount of stock in keeping the traditions of our founding fathers in place.

The realization came when the topic of nixing the senate filibuster was recently added to the docket. As you well know, the left’s desire to get rid of the filibuster has been a topic of serious debate for some time, with most in their party saying that they agree.

Luckily, not all Democrats are in favor of getting rid of the filibuster.

For all the focus on Manchin being anti-nuke on filibuster, this is what a spokes for @kyrstensinema tells me + @mikedebonis:

For those of you unaware of just what this tactic is, the Senate’s website defines it as an “informal term for any attempt to block or delay Senate action on a bill or other matter by debating it at length, by offering numerous procedural motions, or by any other delay or obstructive actions.” Essentially, it is a tactic used by the minority party in the hopes of “delaying” or postponing judgment on a particular bill or Senate action.

In fact, it’s often one of the only methods the minority party has at their disposal in such cases.

By definition, the majority party will always have the win if everyone votes according to party lines. The filibuster allows the minority party to have some power still, giving them the chance to make themselves heard, if even for just a short time.

And never was that more important than now.

Current rules state that at least 60 votes are needed to pass legislation, making the filibuster necessary to sway enough votes to get to that number. But seeing as there is a near-even tie in the Senate now, with 50 members in each party, not counting the tie-breaking vote of now-Vice President and very liberal Kamala Harris, it might take a while before one party gets that.

The Democratic Party is trying to make it so that only a simple majority, 51-50, including Vice President Kamala Harris’s tie-breaking vote, is needed.

Progressives in the party determined last year that the only way that specific left-leaning talking points and policies would be pushed through would be if they could eliminate the filibuster and rely on a simple majority. After all, they know most of America doesn’t agree with their methods or ideas, and therefore the only way to get them to happen is to take the voice away from the people.

They actually said as much.

The Indivisible Project stated, “It’s simple: none of the progressive issued that Democratic candidates and congressional leaders are discussing today will become law unless we do something about the filibuster. If (Senate Minority Leader) Mitch McConnell expects to be the Grim Reaper of progressive policies, the scythe he’ll use is the Senate filibuster. Unless we change the rules.”

Thankfully, senators like Sinema still have some sense in their heads and won’t allow this to happen.

It has been reported that Manchin is also not going to vote to eliminate the filibuster. According to Politico, he was “emphatic” that he won’t “vote to kill the filibuster.” He even added that there was no scenario “whatsoever that I will vote to get rid of the filibuster.”