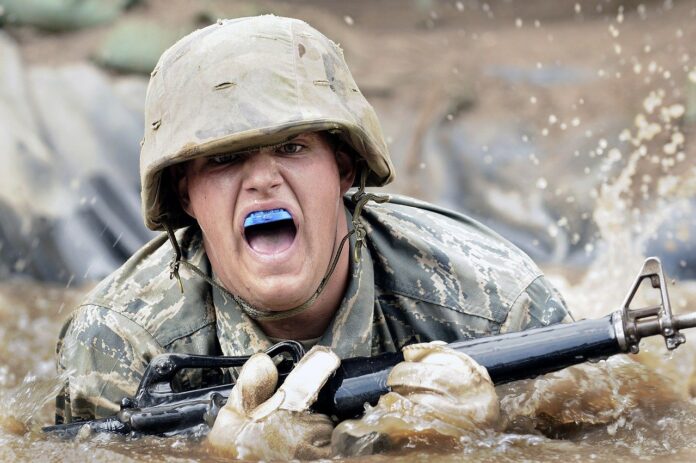 Joe Biden wasted no time in whipping out a pen and killing everything that had Trumps’s signature on it. He couldn’t do it fast enough. He flew through a slew of executive orders, not taking time to read any of them, as Kamala Harris, dressed in black, stood behind him nodding her head in approval.

Was this a funeral of sorts to them? The attempted murder of a presidential legacy? Certainly, Harris was grinning from ear to ear under her black mask.

One of those pieces of paper that Biden signed had to do with transgenders serving in the United States military. Biden views the military as one big happy family. And families keep secrets.

Just because a female soldier spots another female soldier in the shower with a little something extra is no reason to go blabbing. The same goes for a guy not having anything to show for himself in the men’s shower. It really shouldn’t bother any of them in the least. The need to learn how just go with it.

In a freshly signed executive order, Biden, or someone, wrote, “It is my conviction as commander-in-chief of the Armed Forces that gender identity should not be a bar to military service.” Biden said that allowing transgenders to serve in the military “does not have any meaningful negative impact on the Armed Forces.” He also claimed that it has a “minimal” effect on “readiness and health care costs.”

Where Joe got his information is anyone’s guess. In 2018, then-Secretary James Mattis did some research and discovered how the Obama administration, who also thought this to be okay, ignored mountains of research to the contrary. Mattis’s report was precisely why Trump destroyed Obamas’ policy by reversing it.

Trump was more interested in listening to what the experts at the DOD had to say on the issue. It was their contention that allowing transgenders to serve would prove chaotic and would present a “considerable risk” to the “effectiveness and lethality” of our nation’s armed forces.

Both Obama and Obama Jr…err…Joe Biden, have used the antiquated and highly-disregarded RAND study as the basis for their identical decisions. But the DOD has had a front-row seat for watching the real impact transgenderism has had on the troops.

The DOD stated their disapproval by pointing out how the RAND had “mischaracterize[d] or overstate[d] the reports on which it rests its conclusions” (p. 39). “In fact, the RAND study itself repeatedly emphasized the lack of quality data on these issues and qualified its conclusions accordingly” Could they have been more clear?

In his 2018 report, Mattis had written the following: “Military standards are high for a reason. The trauma of war, which all service members must be prepared to face, demands physical, mental, and moral standards that will give all service members the greatest chance to survive their ordeal with their bodies, minds, and moral character intact. The Department would be negligent to sacrifice those standards for any cause.”

In 2016, Barack Obama unloaded a dumpster full of chaos on the military when he told potential transgender recruits to jump right in. Morale immediately hit ground zero. America’s warriors weren’t overly fond of the notion.

Their first task was in retrofitting every bathroom on every military camp, post, base, and ship. Then they were tossed into sensitivity training where they were taught how to act, what to never say, and how to address “them.”

New health guidelines had to be established as some old ones needed to be revised. All the while military leaders were at their wit’s end trying to keep their fighting troop’s tumbling morale high enough to still be effective and battle-ready.

Federal Reserve Chairman during the Obama era, Peter Sprigg, gave fair warning of how transgenderism in the military could conceivably topple $3.7 billion over 10 years. This staggering sum was only attributed to medical costs and lost deployment time and nothing else.

It’s almost as if Obama might be whispering in old Joe’s earpiece, but who are we to imply? Here we go again.