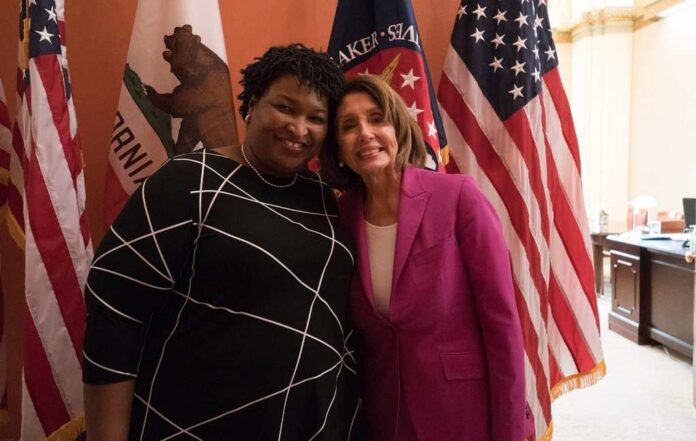 As you have no doubt heard by now, many states throughout the nation have begun pushing through efforts to reform or fix our election system. And while state lawmakers may not be able to do much beyond lending a voice in support of such measures on a national level, their hard work can go a long way when it comes to state-held elections.

Take the state of Georgia, for example. They’ve recently passed new state laws that make voting much more secure and uphold the kind of integrity our election process can’t exist without.

Of course, the political left hasn’t taken too kindly to new laws like this.

One of the loudest voices in opposition to election integrity laws, as they have been dubbed, is failed 2018 gubernatorial candidate for the state of Georgia and Democratic activist Stacey Abrams.

Like always, she is sticking her nose where it doesn’t belong and making all the stink she can in favor of her beloved party. Of course, she’s doing so with such a flair for the dramatic that practically no one would be hard-pressed to believe her – especially when she prefaces her conversation with no “hyperbole” is being used.

On Monday, Abrams appeared on MSNBC’s Joy Reid to speak about the growing trend of election reform. She began by making elaborate and far-fetched statements claiming that those who overran the Capitol on January 6 are the exact same people who are now pushing for “insurrection” in our nation’s voting system.

Furthermore, she claimed that such efforts are meant to disenfranchise the disabled, voters of color, and young people, just to name a few, as well as to subvert the entire democratic process.

She told Reid, “We have got to pay attention to the fact these laws do three things. One, they’re anti-voter. They are designed to stop voters that the Republicans found inconvenient in this last election. Namely, young people, people of color, the disabled.”

Now, it’s hard to imagine how showing a state registered ID, such as a drivers’ license, is somehow oppressing votes of minority and such. After all, don’t you have to show an ID to do well, just about anything nowadays? Buy alcohol, get into a club, or even buying certain medications.

But of course, Abrams doesn’t want to talk about that. Instead, she goes on to her second so-called point of why these election integrity laws are so bad for America.

“Number two, these are anti-election worker bills. They are designed to get good people to abandon their post. To criminalize those who still want to do their job and to replace them with those will undermine the administration of elections.”

I’m sorry, but who’s being replaced? Wasn’t it the Democrats who insisted on all these new-fangled voting machines, drop-boxes, and mail-in votes that effectively eliminate the use of so many poll workers?

Abrams’ third point is that these laws are “designed to subvert democracy.” According to her, those individuals pushing for these election laws are the same who supported Trump’s move toward insurrection back in January. And they are only “hastening the demise of our democracy, and this is not a hyperbole.”

Yeah, right. Just like the idea that showing ID is voter suppression isn’t hyperbole, or that Trump incited violence and “insurrection” isn’t a hyperbole…

Meanwhile, you have counties in Georgia still coming up with new evidence that the 2020 election wasn’t the fairest and most secure our nation had ever seen.

In Fulton County, for example, where much of the initial accusations of voter fraud came from in the state, an election official just admitted that some 385 documents and reports for the 2020 election have come up missing. These forms include the chain of custody documents needed to prove some 18,901 absentee ballots as valid.

Just to put that into perspective, that’s 6,000 more votes than the 11,779-vote margin that Joe Biden supposedly won the state by.

And yet, those like Abrams still somehow think no changes are needed to correct the voting system or what happened during the previous presidential election. She said, “The insurrection is continuing, and we’ve got to stop it in its tracks.”

Nope, that’s not hyperbole at all…