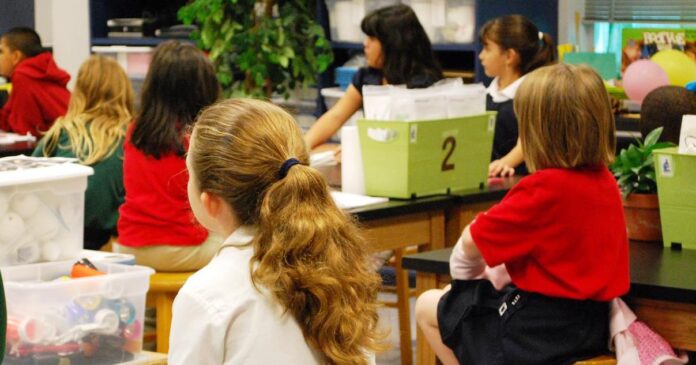 Parents at an Upper East Side school are furious after information about their kid’s health class came out and with good reason.

As parents, it’s sometimes an excruciating decision to decide whether or not to delegate a child’s education and well-being for hours out of the day to some institution or another. It’s even more devastating if someone discovers the people they trusted have betrayed them, but that’s just what happened in the case of Justine Ang Fonte who was bringing in about 55,000 dollars per year teaching sex-ed at the Dalton School on Manhattan’s Upper East Side.

100% Fed Up reported that the inappropriate lessons ranged from the mildly frustrating where it teaches six-year-olds that their parents have to seek permission before hugging them, all the way to a cartoon of a child asking, “ “Hey, how come sometimes my penis gets big sometimes and points in the air?’‘ “That’s called an erection,” the adult cartoon character responds. “Sometimes I touch my penis because it feels good,” the boy adds.

This disturbing video caused outrage among parents who, understandably, felt the teacher was overstepping, out of line, and in all other ways, unacceptable. However, the school didn’t quite see it that way.

‘Throughout her tenure at Dalton, Justine Ang Fonte has helped to develop an exemplary K-12 Health and Wellness program.’ adding ‘Dalton — our faculty, staff, administration, and trustees — continue to stand firmly behind this program and those who teach it.’

Parents were not impressed. “This inability to admit a mistake or acknowledge misstep is strange,” said one frustrated parent. And lest anything think this was religated to the parents of the children involved, even the comments on this story at the source had hundreds of comments by outraged adults:

“Why was there a sex education teacher for first graders?????” asked one. “Why are the leftists so obsessed with showing pornography to our children?” asked another. “Any school teaching ‘Sex Ed’ to first graders has a screw loose and should be disciplined by state authorities,” declared a third.

The teacher did eventually resign, after parents put enough pressure on the school that her next school year would have likely been incredibly uncomfortable, to say the least.

This story is just another demonstration of how vigilant parents (and really anyone) should be about making sure that the values of the left aren’t pushed down the throats of everyone else, especially not impressionable children.

No doubt one could find thousands if not tens of thousands of young, smart educators who think that it’s a great idea to start molding the minds of six-year-olds to teach them a “healthy” approach to sexuality, but are those people who have raised well-adjusted adults? Because if not, we should ask ourselves what the people who have been successful have done.

Chances are if you polled ten parents who have adult children they love and who they have healthy relationships with, they would tell you that the best thing you can do for a kid is let them be a kid. Let them be more worried about building a cyborg out of mismatched lego pieces than about even the normal workings of their health. Let them learn to skip rocks, not hugs, and let them get so bored away from all cartoons that they decide to invent something new.

Giving a kid a childhood is one of the greatest gifts they’ll ever receive. And they will no doubt thank you for it in the long run.